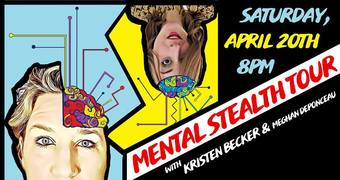 Brought to you by Bigtop Studios, Birdy, and La Quinta Inn & Suites Trinidad!


Kristen Becker
Buffalo born, Louisiana raised comedian/producer turned activist Kristen Becker’s comedy has often been described a “bawdy sense of reality, served with a slice of southern charm”. Touted Buffalo's "Queen of Comedy" her rein in the  city included founding the "Doin' Time comedy" open mic at Nietzsche's which led to her courting the owners (and serving as inaugural GM)  of Helium comedy club into opening their Buffalo location in 2012
Becker left the queen city once the club was up and running to return to the stage. In 2015,  She founded her "Loosen the Bible Belt" tour with Pastor Jay Bakker (yes, he is Tammy Faye's son).  Bakker and Becker tour the deep South offering a unifying voice to the discussion of religion and the LGBTQ community.
In 2016, Becker founded her Summer of Sass program (SoS), which is a summer work program for LGBTQ young adults. Queer applicants from all over the country apply to live and work in Provincetown mass, a well established haven for the community.

More info at summerofsass.com In 2019, Becker presents LEZBIANATI, a home on the internet for badass, benevolent bitches. www.lezbianati.com

Meghan E. DePonceau
Giggle Maker. Hooch Slinger.
Blood made of Frank's Red Hot.
DePonceau left behind her previous career, as a ruthless bookie in Buffalo, NY  to pursue her passion in the defensive dark arts of stand up comedy, in Denver, CO. Currently she  is the "Chief of Butts" at 5280Comedy.com, the host/producer of two monthly shows including unCORKED! first Wednesdays of the month at Infinite Monkey Theorem and  Charlie Foxtrot third Wednesdays of the month at Stanley Market Place. She is also co-host of all TMJ! Projects including Food Fights, Ripen Open Mic, Trivia Nights & Shanty Town. Her writing has been featured in Suspect Press and Barf Magazine. Meghan has also had stories featured on the RISK! Podcast & Narrators Podcast

Trains, bicycles and lots of laughs! Trinidad serves as the center station of Amtrak's Southwest Chief rail line that connects Chicago to Los Angeles by way of Kansas City, Albuquerque, Flagstaff and more. This festival combines the area's love of the outdoors stand-up comedy at relaxing Trinidad venues.