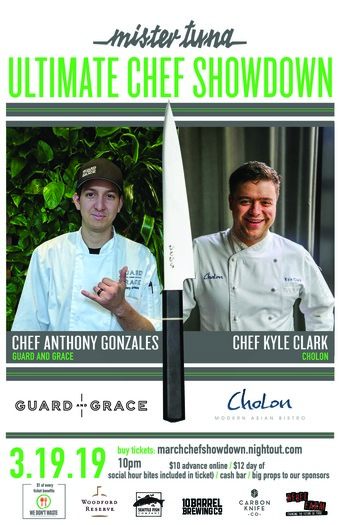 Kick off the evening watching your favorite bartender's compete in Woodford Reserve's 2019 Manhattan Experience.  After the drink battle?  Stay for a food battle!  Chef Anthony Gonzales of Guard and Grace represents Team TRG as he goes head to head against Chef Kyle Clark of Cholon.

If you haven't joined us for an epic showdown, here's how it works:  Our competing Chefs are given three surprise ingredients and 30 minutes to WOW our panel of judges, with whatever means necessary.  The winner is knighted with a custom Chef Showdown blade from Carbon Knife Co.  No rules, just a winner, and lots of fun.  Come early to enjoy social apps.  The competition begins at 10:30.

"Originally from Wisconsion, Chef Kyle Clark was drawn into the kitchen at 15, starting in the industry as a food runner/dishwasher. A love for making people happy and being challenged daily compelled him to attend CIA in New York. After graduating in 2013, he moved to Denver and began working for the ChoLon group. He started at ChoLon, working his way up from line cook to Sous Chef and helping with some other projects for the group along the way. A passion for South East Asian flavors and fermentation keeps him learning and driven."

"Raised on the magical Big Island of Hawaii, Anthony Gonzales began his culinary career at the age of 15 working in his parents restaurant. Graduate of the Culinary Institute of America at Hyde Park, he specializes in Asian Cuisine. Returning to Hawaii, Anthony spent the next eight years working at some of the finest restaurants in the state.  Anthony, his wife Sheyenne and daughter Sofia moved across the great Pacific Ocean in September to join the Guard and Grace Ohana."