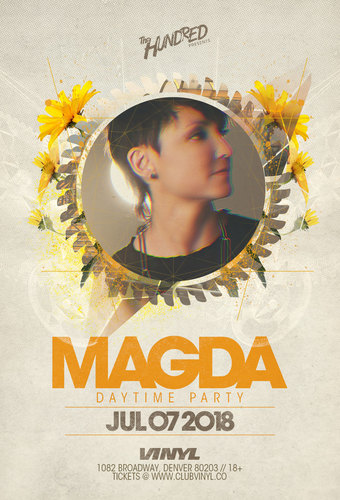 Magda's realm as an artist spans far beyond the typical role played by DJs and producers. With an open mind, Magda will try her hand at whatever feels right: from producing high-quality Tequila to tech collaborations, fashion and art, Magda has created a truly unique, multifaceted expression of herself. Born in Poland and raised in Detroit, Magda has soaked up the various characteristics of her surroundings, resulting in a widely-cultured perspective, tuned to see beauty and potential in the most derelict and depressed of places. As a teenager partying in Detroit, it wasn't long until Magda was fully immersed in the city's underground scene. In 1998, she was dropped straight into the deep end; she joined Minus and began touring the world as Richie Hawtin's opening DJ. Whilst this was a perfect platform for Magda to show off her talents and develop a fanbase, it brought with it the constraints of an established reputation. Magda was defined as a DJ under the Minus umbrella, but since has forged her own path. Magda's touring schedule is amongst the most high-profile and demanding around, with regular bookings at many of the world's very best house/techno clubs and festivals. She's proved herself as a consistent, adventurous and top-quality performer, with a knack for bringing tracks together in unexpected ways. As well as notable accolades such as a BBC 1 Essential Mix and playing at Timewarp's live streamed 20th anniversary, Magda has been behind some stand-out commercial mixes. 'She's A Dancing Machine', released in 2006 through Hawtin's label, was truly seminal. It intricately layered 70 tracks into 16 sections and displayed an almost unprecedented level of energy for a minimal DJ mix. She was later invited to record a mix for Fabric esteemed CD series, and adopted a similar patchwork approach to brilliant effect. Her latest, two-disc mix compilation, out through the Balance series in February, gives equal measure to the experimental and club-focused aspects of her DJing. Incorporating music from the likes of Shackleton, Murat Tepeli and Marcel Dettmann, Magda takes the listener on a thrillingly unpredictable listen. Though solo Magda releases are relatively rare, there's no doubt her ability extends beyond the booth to the studio. In the fall of 2010, Magda revealed her debut on Minus, 'From The Fallen Page'. It combined her love for Italian horror composition, Detroit techno futurism and straight-forward dancefloor functionality into a quality body of work that still sounds fresh today. She has also remixed the likes of Plastikman and Depeche Mode. Collaboration has become a vital part of Magda's studio work. Cornerbred is the project she shares with partner Daniela Huerta. Offering a respite from normal DJ sets, it revels in avant-garde and real-life concepts, utilising a broad sound pallet and lending itself to live performance. The pair have recorded mixes on Soundcloud and sites such as Oki-ni, the hour-long sessions covering a wide array of styles, sounds and periods, from 80s electro to more atonal works. DTR (Define The Relationship) is Magda's edits venture with Nyma, dedicated to 'reshaping, reintroducing and reviving early influences as a homage to the past, present and future'. So far, LL Cool J, Chaka Khan and Jody Watley have been under the DTR microscope with fascinating results. On top of all this, Magda has proved herself as a label boss, running the long-standing and successful Items & Things imprint with Marc Houle and Troy Pierce. The label thrives on the off-kilter and the uncommon, unearthing new artists and sounds that push boundaries. Thirty releases in and Items & Things proudly count the likes of Jimmy Edgar and Rework amongst its roster. With a new event series and much more in the works, 2015 is an exciting year for Magda and her fans. Her Maria Pascuala Tequila brand and design work also continue to open new avenues, each of them explored with the stamp of quality Magda has come to represent.