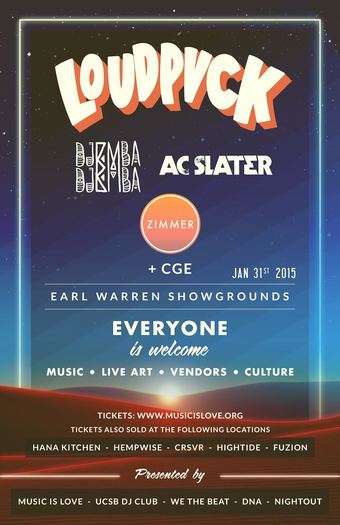 When the two worlds of electronic music DJs/producers Kenny Beats (aka Kenneth Blume) and Ryan Marks collided in 2009, something magical happened. Call it a conundrum or rather simply a matter of fate . . .

This dynamic duo is best known as LOUDPVCK. They met at the Berklee College of Music (Boston, MA) and started producing tracks together - dropped ‘em on Soundcloud and nearly that moment became an overnight sensation.

Since then, the buzz and hype about LOUDPVCK has only continued to grow. The doors have been swinging wide open; a remix for NERVO (Hold On), getting added to the Deckstar Management roster, receiving serious playtime on BBC Radio One, not to mention - getting lots o’ love and support from the likes of: Skrillex, A-Trak, Dillon Francis, Zeds Dead, Danny Brown, 12th Planet, Adventure Club, Flosstradamus, Baauer, UZ, DJ Carnage, AC Slater, DJ CRAZE, Bro Safari, Brillz and Paper Diamond to name a “few”. . .

What does LOUDPVCK sound like? Genre-pigeon holes aside, they have thrown down some of the most filthy, catchy jams out there, causing their popularity to rise in a massively short amount of time.

Djemba Djemba is music born from a state of permanent contradiction, held together by one underlying and adaptive principle: rhythm. Experimenting with polyrhythms, 90’s FM synths, and the all-important 808 Kick, Djemba Djemba crafts a sound that is both intelligent as it is brain numbing.

It’s easy to detect the influence of UK Bass music currently dominating clubs, yet at the same time feel altogether new, and in stride with the response taking place in New York, Chicago, Boston, and his home in Los Angeles.

With releases on Mad Decent, his own imprint Rabbit Records, and Beat Team Supreme, Djemba’s music has been supported by the likes of Diplo, The Gaslamp Killer, Rusko, Baauer, Obey City, Major Lazer, Paul Devro, and BBC Radio 1. With exciting collaborations in the works with some of the biggest names in EDM, and his finger on the pulse of the latest dance music via his co-club night The Melt, Djemba Djemba certainly has a few surprises on the horizon.

BIO:The King of Heavy Bass House in AmericaAC Slater has begun a lengthy career for himself with his "Night Bass" sound by fusing elements of house music with the dirty basslines of UK garage and sprinkles of old-school rave synths and breaks. AC Slater's career kicked off with a bang in 2008, with his seminal remix of "Turn the Music Up" on Trouble & Bass becoming an instant anthem. Moby listed it as one of the best 10 tracks of the decade, declaring it a "perfect song." AC has collaborated with influential underground artists such as Nina Sky all the way to chart toppers like Far East Movement, and has done official remixes for the likes of Big Sean, Moby, Robin S. and many more. A quick look at Slater's Beatport page reveals well over 100 tracks and remixes over the last five years, including his best-selling Jack Got Jacked EP, a blatant declaration of the invasion of house music by all things bass (and the start of a lengthy friendship with Jack Beats). Fast forward to the present, AC has toured the globe several times and his tunes have been played at every major festival and club in the world by DJs including Skrillex, Diplo, 12th Planet, Jack Beats, and so many more. Slater's tunes and guest mixes can regularly be heard on major radio stations across the world, including the UK's BBC Radio 1 and Rinse FM and Australia's Triple J. His crew Trouble & Bass and his own record label Party Like Us continue to release some of the most groundbreaking and forward-thinking bass-heavy dance music in the underground.ZIMMERwww.facebook.com/zimmermusicwww.soundcloud.com/zimmermusicwww.twitter.com/ZIMMERmusique

BIO:With his tropical twist on house and disco, Zimmer is taking 2014 by storm. The Parisian producer calls upon both the ‘City of Love’ and California for his music, combining feel-good grooves and dreamy soundscapes.In the few years he’s been around, Zimmer’s made his name largely of blog-hit remixes (MØ, Moullinex, Moon Boots…) and fun reworks (Ella, Chic, Tina Turner…), while his religiously followed mixtape series keeps listeners in a year-round summer state of mind.His original work proves just as good, too: “Galapagos” is a euphoric slow house gateway to the islands it’s named for, while his latest single, “Sensify Me” dips into night-time. Having recently joined hot label Roche Musique, Zimmer has emerged as one of the leaders of the new French house sound along Darius, FKJ, Kartell and more. But perhaps the best way to experience the magic power of Zimmer is to see him DJ. His euphoric sets have made him a stapple in the international DJ circuit with multiple US and Asia tours, weekend club dates all over Europe and appearances in festivals like Calvi On The Rocks, Peacock Society and more.

+ Opening local support from CGE-Live Art-VendorsFuzion Glass Gallery, Goodlife Roots, Good Fortune Gems, Lucid Artifacts,Free Feather Photography & Creations, Gypsy.Boo.Love, -CultureOur Build crew will be transforming Earl Warren Show Grounds brining you visually stunning production, and projection mapping. We are happy announce that our "Lucidifam" over at Lucidity Festivals will be present onsite! More info around this TBA check out more information regarding Lucidity and the festival in the meantime @www.lucidityfestival.com

Half shark-alligator, half-man, half-man half-shark, Djemba Djemba's beats are a bassy assault of trap mix, hip-hop and not limited to juke. Enjoy your trip through epic mel... View Artist

Trouble & Bass's AC Slater has quickly become one of the most sought after remixers and producers with no sign of slowing down. Raised on 90's Hip-Hop and nourished by old schoo... View Artist

1. Zimmer is a Horizontal Disco DJ & Producer from Paris, France. https://soundcloud.com/zimmermusic 2. zimmer is a musician from Berlin, Germany, who has released several ep... View Artist