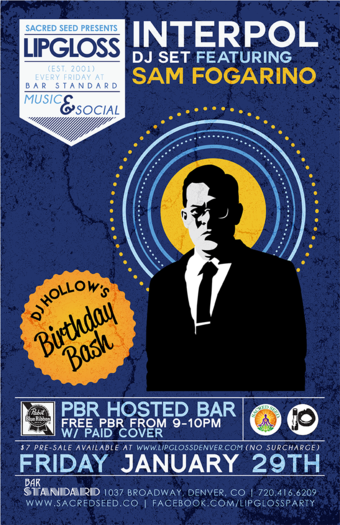 Established in 2001, Lipgloss is the country's longest-running indie dance party. Every Friday night, revelers are treated to a mix of music comprising the best in indie, rock, soul & retro. On a typical night, one might hear songs from artists as varied as LCD Soundsystem, T-Rex, Stevie Wonder, Joy Division, Franz Ferdinand, Sleigh Bells, Blur, Interpol, Future Islands, and others, both known & lesser-known. Lipgloss has been featured in national press like Spin Magazine, Filter, and Under the Radar, and has consistently received awards from local papers and magazines. Village Voice's “Westword Magazine” editors & readers have awarded Lipgloss & crew 17 “Best Of” awards over the years, including “Best Club Night in Denver 2013,” which Lipgloss has won an astounding 9 times. Lipgloss is proud to be both the forerunner of dance parties that break the mold of typical club nights and one that is still rocking the night away every week.