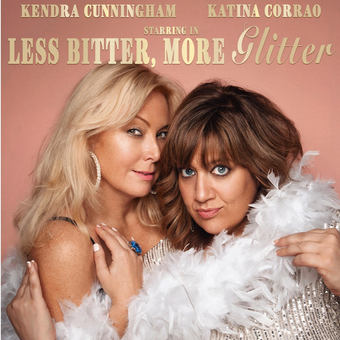 Kendra Cunningham and Katina Corraro headline at SoulJoel's
Fresh off their album release of Less Bitter More Glitter available everywhere you can stream or purchase music!

Katina Corrao is an actress, comedian, writer, and co-host of the stand-up show Lasers in the Jungle. The New York Times calls Katina a “staple in the New York comedy scene.” She’s been seen on The Daily Show, Broad City, Deadbeat, Big Morning Buzz Live, and in audition rooms all over the tri-state area. In addition, she’s warmed-up audiences for Good Morning America, The View, The Chew, The Rachael Ray Show, The Jenny McCarthy Show and more. She is a published author and blogs for The Huffington Post. She has appeared in numerous web series including Uninspired and Jack in A Box. Her own award-winning web series The Good Neighbor Minute explores Katina’s desire to be the nosey neighbor in a sit-com. She has been featured in The New York Times, Time Out New York, Reader’s Digest, Broadway World, Splitsider, Vulture, and more. Katina performs her one person show, Funky Cold Katina all over town and her first comedy album “Hot Date” (Little Lamb Recordings) debuted at #1 on the iTunes comedy chart.

Kendra Cunningham is a Boston-born stand-up comic, comedy writer, actress and filmmaker living in Brooklyn, where she owns a super comfortable bed. She also bartends and has an MA in Forensic Psychology. Kendra spends most of her time wondering where the hell her sugar daddy is and hoping he didn’t settle.

Kendra regularly contributes to The Huffington Post and the comedic relationship blog Beauty and the Beast. Her short films have been screened at a number of festivals; Lonelygirl48, which she wrote and acted in, won the Boston Comedy Festival and the Palm Beach Women’s International Film Festival. She has been featured in Time Out New York and on CNN Money, among other publications. (Check out Kendra’s short films and press page.)