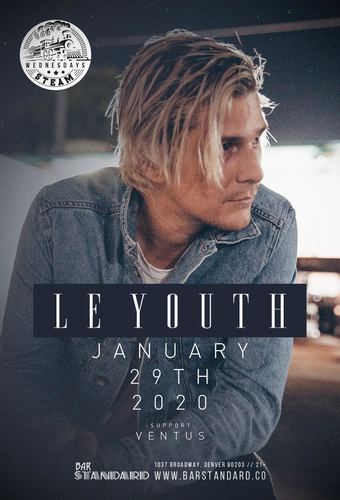 OK
Wes James, better known as Le Youth, is the slightly enigmatic musician/DJ/producer from Los Angeles, California. From a young musician with numerous monikers under his belt, in the chaos of Hollywood, the Le Youth project was born bringing to life a seamless blend of breezy California vibes with a twist of European flair and an air of mystery. Bridging the gap between underground and mainstream, indie and pop, Le Youth has proven himself a dynamic force in the music and entertainment world.In the few short years since Le Youth's inception, he has racked up a list of worldwide crossover successes with his singles, including "COOL," and "Dance With Me," both topping Radio 1's A-List, to Spotify chart successes "If You're Leaving" , "Me Without You" and "I Could Always Feat. MNDR".With each release, Le Youth has continued to light up dancefloors and radio stations across the globe. In 2016, Le Youth launched his own imprint record label, Homewerk Records, which brought about numerous brilliant releases and a sold out nationwide Homewerk Tour. After a successful year operating the new brand in 2017, summer ushered in the beginning of a new chapter in Le Youth’s already illustrious musical story: his first release on Parametric/Atlantic Records, “Clap Your Hands” Feat. Ava Max. The single, co-produced by Grammy Award Winning producer Cirkut went on to top Spotify's US Viral Chart. His track record speaks for itself, proving that Le Youth’s next wave of success is just around the corner.
Live Music Nightlife Concert