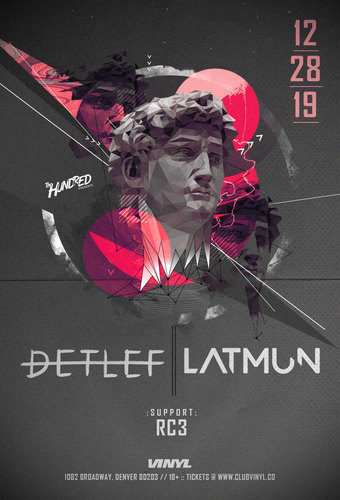 A DJ and producer of the highest order, Alexander Georgiandis, AKA Detlef, has garnered a reputation as one of the most exciting names in the underground scene. The Greek artist has rapidly established himself as one the leading names in the industry, releasing and remixing with well respected labels including Hot Creations, Moon Harbour, and Relief.

Earning support from the likes of Jamie Jones, Marco Carola, Green Velvet, Matthias Tanzmann, and Pete Tong, Detlef has become a firm favourite with clubbers thanks to his vibrant mixes and dynamic live sets. An official resident at Jamie Jones’ iconic Paradise nights at DC-10, Detlef has enjoyed a relentless touring schedule in 2017, with dates at the Paradise Ibiza’s closing party, The Warehouse Project, and ADE’s Paradise event, Insomniac’s Escape Festival, and CRRSD Festival.

Representing a career highlight so far, Detlef’s 3-track ‘Swagon’ EP, released on Repopulate Mars was met with critical acclaim, amassing over 3 million plays on Spotify, and securing the #1 spot on Beatport in the process. No stranger to a collaboration, Alex has successfully worked with the legendary Green Velvet on the Bassick and Groove Nation EPs, and has live streamed sets at the likes of fabric, BPM, and EGG so far 2017 alone, Detlef is moving towards the next chapter of his exciting career, continuing his meteoric ascendency in the industry.

Latmun, the moniker of Joe Bradley is making his mark through a unique interpretation of the Tech House soundscape. Both his DJ sets & own productions have a coherent energy, infectious grooves being the key component for crowds to be captivated worldwide.

2016 was career defining for Latmun, with all 3 EP's breaking into the top 10 on the Beatport Tech House releases. This started off with his 'Def' EP on VIVa, which received support from scene heavyweights like Skream, Claptone, Claude Vonstroke, Mathias Tanzmann, Steve Lawler and many more, it still continues to soundtrack the biggest festival stages today. The Dance & Bop EP on Wow! Recordings had similar success and carrying on the momentum through to his most recent offering via Leftwing & Kody's Lost Records. 'Cosmic', the titular track shot all the way up to number 5 in the top 100 tracks chart, showing he earnt being named one of the stand-out artists of 2016. The most exciting project came about when Green Velvet asked him to remix his seminal classic - Flash - alongside the likes of Eats Everything and Oliver $. Considering the relatively short time he's been in the limelight, he's already made a lasting impression.

Showing consistency, 2017 went straight into full throttle with the Everybody’s Dancin’ EP on Green Velvets Relief Records securing the number 1 spot on Beatport. Making sure people knew there was more to come, Latmun then released the appropriately named ‘Groove Tool’ on Lee Foss’s repopulate mars, and is now following up with a debut EP on the coveted Hot Creations titled ‘Footsteps’ to close of 2017. Already gaining support from Jamie Jones, Carl Cox and other scene heavy weights, its sure to be another defining EP for the artist. Coupled with an intense worldwide touring schedule, and an armoury of releases waiting to be unleashed on the most exciting labels in the scene… 2018 is set to be the best yet.

Latmun is an all round lover of music, the rest can be denoted by virtue of listening and experiencing what he brings for yourself. With regular appearances in acclaimed venues such as Ibiza's DC10, Manchesters Warehouse Project and many more; Latmun is sure to be creating moments and sharing experiences on a dancefloor near you.

Latmun is an all round lover of music, the rest can be denoted by virtue of listening and experiencing what he brings for yourself.
Live Music Nightlife Concert