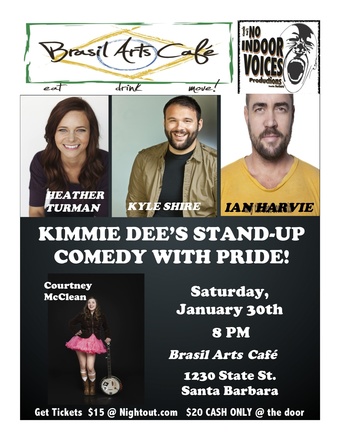 General Terms
All ticket sales are FINAL. Online tickets are ONLY $15 and $20 CASH ONLY at the Door!

Ian Harvie's credits include the fact he's hilarious, has featured for Margaret Cho and is a current cast member on the hit show "Transparent."

Kyle Shire is "knock you off the chair funny!"

Heather Turman is unapologetic. Her brutal honesty and impeccable timing have landed her on the Fox Series "LAUGHS,"  "Comedy Time TV" and "Stand Up & Deliver."

Courtney McClean is a singer/songwriter that kills with witty lyrics and raw talent.

Kimmie Dee is the Creative Director of NO INDOOR VOICES Productions, a writer, producer and performer of all things comedy. She's performed at The World Famous Comedy Store, The Improv, and creates comedy shows at local alternative venues around Santa Barbara.

On-line ticket sales end at 6pm the day of the event. A limited number of tickets will be available at the door for $20 CASH only.