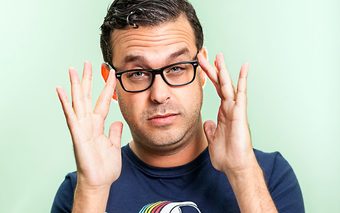 The show will benefit the local food banks!

Tickets ONLY $15 in advance if tickets are bought by November 15th!

and the show is BYOB!

About Joe: Writer, actor, and standup comedian Joe DeRosa has become a favorite on the comedy circuit. His brand of comedy, which mixes brutal honesty and frustration at the workings of the world, has won over comedy fans, radio listeners, and TV audiences nationwide.In 2009 and 2013 DeRosa taped two half hour specials for Comedy Central. Since 2010 he has released five comedy albums. His first two standup albums, The Depression Auction and Return of The Son of The Depression Auction, were released on Comedy Central records in 2010 and 2011, respectively. A third and fourth album, You Will Die and Mistakes Were Made: The B-Sides were released in 2013 and 2014. In 2016, Joe taped his first one hour special, which he also directed, again for Comedy Central, entitled You Let Me Down. The special and album debuted in February of 2017.Joe has also worked as a writer on a variety of notable projects, including Netflix’s highly acclaimed Wet Hot American Summer: First Day of Camp, Comedy Central’s Jeff & Some Aliens, and TBS’ cult hit The Pete Holmes Show, on which he was also a featured performer. Online, Joe created, wrote, directed and starred in Bedrocket’s 2013 web series We Should Break Up and the Warner Brothers web series What Are We Waiting For? In 2011 he directed and, along with fellow comedians Bill Burr and Robert Kelly, co-wrote and starred in the short film CHEAT, which premiered at The Tribeca Film Festival that year. In October 2012, Simon and Schuster released a book based on the film, written by the three comedians themselves.In recent years, Joe has acted quite a bit, being seen as recurring crooked veterinarian Dr. Caldera on AMC’s Better Call Saul. He also has made appearances on Comedy Central’s Inside Amy Schumer, FX’s Louie, HBO’s Bored To Death, E’s Chelsea Lately, and in the video game Grand Theft Auto V.When he’s not writing or acting, Joe headlines comedy clubs across the globe and has been featured at renowned festivals such as South By Southwest, Montreal’s Just for Laughs, Toronto’s JFL 42, The Moontower Comedy Festival, The New York Comedy Festival, The Edinburgh Fringe, The Galway and Dublin Vodaphone Festivals, Gilda’s Laughfest, the Melbourne International Comedy Festival, Vince Vaughn’s Wild West Comedy Festival, and Bonnaroo.
Comedy Non Profit Charity & Causes Nightlife Food & Drink