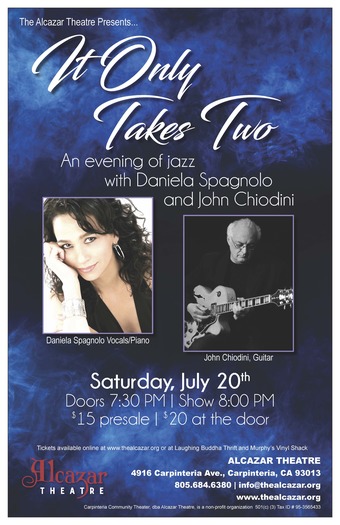 An evening of jazz with Daniela Spagnolo and John Chiodini

Alcazar Theatre
facebook twitter email
Aniother night of music at the Alcazar that is not to be missed!!  Featuring Daniela Spagnolo and John Chiodini performing together for an intimate evening of jazz.

If you could fuse together the lush, rich, vocal style of the great female jazz singers from era’s gone by, with the current sound of jazz today one might say that Daniela Spagnolo’s voice and original songs are a sublime example of just that. With her strong sense of swing and ability to compose songs with a modern flair, she is truly a unique & refreshing collaboration of yesterday and today. Born in Rome, Italy and raised in New York, Daniela quite possibly has one of the most distinctive and expressive voices in music today.

Guitarist and composer John Chiodini began his performing career in clubs, recording studios and theaters throughout New England in the 1960’s and 1970’s. As a member of the Boston Pops Orchestra under Arthur Fiedler, John made numerous appearances in concerts and on recordings, including the long-running PBS television series “Evening At Pops”. In the early 1980’s, he relocated to Los Angeles, touring, writing, and recording with Peggy Lee.