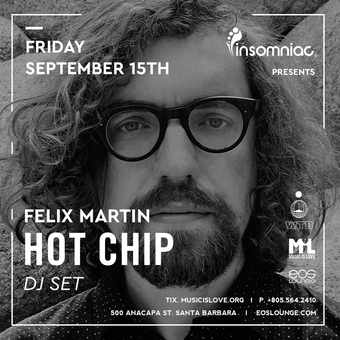 One of the most distinctive and innovative bands combining dance music and indie in the 2000s and 2010s, London's Hot Chip made their mark with the release of their 2000 debut, Mexico. The EP was a hypnotic wash of nearly subliminal, pulse-like techno beats, acoustic guitars, and plinky pianos, but the vocals were the true star of the show. The voices of Alexis Taylor and Joe Goddard are a fine study in contrast: Taylor's dreamy, effortless falsetto cuts to the heart of the beauty of performers like Jeff Buckley and Nick Drake, while Goddard's cool monotone sounds world-weary and gruff in comparison. Self-released by Hot Chip in 2002, Sanfrandisco E-Pee dabbled in more playful sounds, from the beatbox dubbing of the title track to the closing notes of "Fanta," in which Taylor pleads with the listener to "make sounds of the summer." The group signed to revered N.Y.C. record label DFA in 2005 and released the Over and Over EP, as well as the excellent 2006 full-length The Warning, which was followed by a DJ-Kicks mix album in 2007. Late that year, the Grammy nominated single "Ready for the Floor" heralded the arrival of Made in the Dark, which featured some of the band's most focused grooves and poppiest melodies to date. The mellower One Life Stand followed in 2010, along with a remix collection later that year. Hot Chip left DFA for Domino, which released the more uptempo, experimental In Our Heads in 2012 and the following year's Dark and Stormy EP. The band returned in 2015 with Why Make Sense?, which found them reuniting with In Our Heads producer Mark Ralph and exploring sounds ranging from disco to '90s R&B to post-punk. ~ Karen E. Graves, Rovi