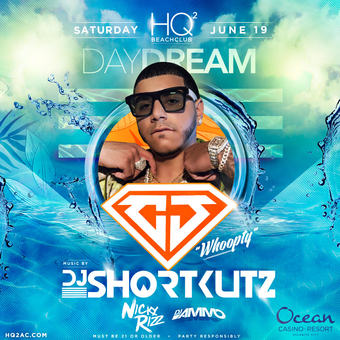 HQ2 Beachclub ft CJ and Shortkutz along with Nicky Rizz

Doors open at 11:00AM. All sales are final. No refund. No exchange. No cancellation possible. 21+ with valid photo. The ID of one individual in your party should match the name on the tickets.

HQ2 Beachclub ft CJ and Shortkutz along with Nicky Rizz

General Terms
Doors open at 11:00 AM. All sales are final. No refund. No exchange. No cancellation possible. 21+ with valid photo. Ticketfast tickets will be released 4 days prior to show date. The ID of one individual in your party should match the name on the tickets.

Dress code:
We have a strict “swimwear attire” dress code. NO athletic apparel (jerseys, basketball shorts), jeans, cargos, ripped clothing, sweats, baggy swim attire, excessive chains/jewelry, dress shoes, boots, socks worn with sandals, nor images of, or any reference to drugs, or drug use is prohibited on all clothing. Swimwear must be on prior to entering the venue. Management reserves all rights of entry based on dress code etiquette.

All entry is based on management's discretion. Any person who refuses to comply with any regulation governing public bathing or swimming facility or any rule of that facility must be excluded from the premises.

All Ticket sales are final and are non-refundable or transferrable.
You agree to carefully examine your ticket order prior to completing the purchase transaction. Unless otherwise stated in these Ticketing Terms of Use, all ticket sales are final. The Event Promoter generally prohibits Nightout from issuing refunds or exchanges after a ticket has been purchased or for lost, stolen, damaged, destroyed, or invalidated tickets. Without limiting the generality of the foregoing, you agree not to contact Nightout to seek a refund or exchange from Nightout when Nightout is prohibited from providing one by the Event Promoter, and you agree not to dispute or otherwise seek a “chargeback” from the credit card company you used to purchase tickets from Nightout. Should you do so, you agree that your tickets may be canceled, and Nightout may, in its sole discretion, refuse to honor pending and future ticket purchases made from all credit card accounts on which such chargebacks have been made, and may prohibit all persons in whose name the credit card accounts exist and any person who accesses any associated credit card or who otherwise breaches this provision from using the Service.We are committed to the safety of our guests and employees. Social Distancing and capacity guidelines per New Jersey Directive will be followed at HQ2 Beachclub. Stay up to date and visit theoceanac.com/covid for more info.
Refund Policy
All Ticket sales are final and are non-refundable or transferable.
Age Restrictions
This event is 21 and over. Any Ticket holder unable to present valid identification indicating that they are at least 21 years of age will not be admitted to this event, and will not be eligible for a refund.

OK
Directly on the heels of cracking the Billboard charts with his first Top Ten single on the Billboard Hot 100 chart ('Whoopty'), buzzed about Staten Island rapper CJ is joining us at HQ2 Beachclub on Saturday June 19th.

Earning praise from fellow rap luminaries like Cardi B & Offset, 'both the Puerto Rican born CJ & Whoopty' became viral sensations late in 2020. The track is only now getting its just due as fans can take to dance floors nationwide to the haunting & hypnotic beats of the track. In February of this year, the track went certified gold.

On-hand to handle music on Saturday June 19th is HQ2 resident DJ Shortkutz, who's globally recognizable and a consistent favorite of the crowd at Ocean Casino Resort's Dayclub/Beachclub. DJ Nicky Rizz will also be on hand, who last year was inducted as the newest member of the world-famous DJ Heavy Hitters Crew. Expect Rizz's distinct sound and Staten Island sensibilities to flow throughout his set when he takes to the decks during the afternoon.

HQ2 Nightclub is located directly on the world-famous Jersey Shore in the heart of Atlantic City, also residing within the gorgeous Ocean Casino Resort. Here you will find the world’s top DJ’s appearing weekly for the best dance parties in the city. HQ2 also has the largest outdoor pool party on the east coast called HQ2 Beachclub. The parties are epic, the people are beautiful and the staff is as friendly as it gets!