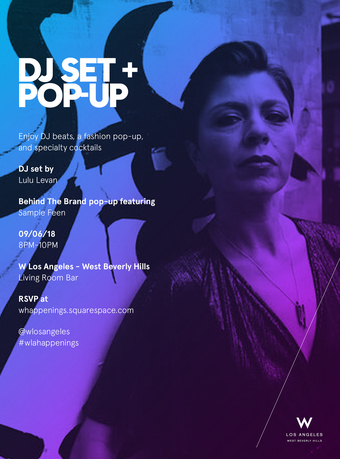 Join us on Thursday, September 6th 8p - 10p for the Happening at the W Los Angeles West Beverly Hills with a live DJ set by Lulu Levan.

Behind-the-Brand pop ups to be announced!

As well as being a professional DJ, Lulu is also an academic and journalist. She has recently completed a PhD in Sociology at Goldsmiths, and has written for a range of publications, from Jockey Slut and The Face through to The Independent and The New Statesman. Music has always been a central passion for Lulu, and a background in the music industry – not just writing about music but managing artists, record labels and promoting events – has helped shape Lulu’s career as a DJ.

Lulu has a playful, credible and creative ear for tunes, and has a natural flair for reading a crowd and filling a dance-floor. Lulu currently has residencies at The NED (Bank), Electric House (Notting Hill), The Groucho and The House of St Barnabas (Soho). She has also worked with brands such as Meantime, Mazda, Häagen-Dazs in association with Matthew Williamson, and Caravan, and was in-store resident DJ for H&M for three years, playing for the exclusive designer launches of Kenzo and Balmain. Lulu also loves festivals and sunshine, having played regularly at Lovebox, Bestival, and Pikes hotel in Ibiza. In addition, Lulu’s wide range of interests matched with her friendly, professional approach and organic industry contacts has also led her to performing at art events such as Ryan Gander’s after-show party in Manchester with broadcaster and journalist Miranda Sawyer, and at awards ceremonies and film premieres. She is currently a firm favourite for private events at The Swan/The Globe theatre on London’s iconic south bank.