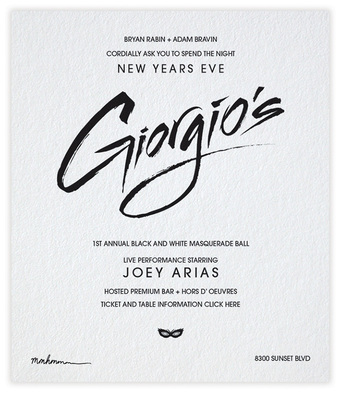 General Terms
Must be 21+. Tickets are non-refundable. All sales are final.

Giorgio’s: A Modern Discotheque, Black And White Masquerade Ball With a Live Performance by Joey Arias

This New Year’s Eve, Giorgio’s welcomes legendary Downtown NYC performance artist Joey Arias.  Since 1979, Joey has been wowing audiences with his pitch perfect performances of classic jazz and blues standards and his surprising and genre-bending cabaret shows.  Fresh off the road from an European tour, Joey enters the magical and intoxicating Giorgio’s with fresh material and a show to remember.  VIP Open Bar Tickets and VIP Tables (including hors d’ourves courtesy of Co-Executive Chefs Nina Clemente and Michael Reed) are available for purchase.