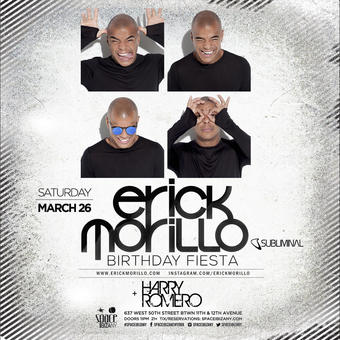 General Terms
Tickets are NON-REFUNDABLE. All sales are FINAL. Must be 21+ to attend.

With his A-list celebrity chums, astronomical bank balance and palatial homes in Miami, Ibiza and soon Los Angeles, few people epitomise the 'superstar DJ' like Erick Morillo. The organisers of the IMS music conference in Ibiza certainly thought so, inviting Erick to give a talk entitled 'Big Dog DJs: Fuck You I'm Famous' earlier this year.

"People definitely know my name, but I've worked hard to get here," Erick says. "It's not like I think people should bow before me because I'm some big star."

Although, with his Subliminal Sessions nights at Pacha having enjoyed their 13th year (making Morillo the White Isle's longest-serving resident DJ in 2010) Ibiza is already conquered. With a resurgent Subliminal Records churning out floorfillers by the month, two new albums - one solo and one with Jose Nunez and Harry 'Choo Choo' Romero as The Dronez - in production and a live show in the works, Morillo is now redoubling his campaign to take America. The next shot in which will be DJing at the opening of the exclusive Marquee club in the Cosmopolitan Hotel in Las Vegas on New Year's Eve, appearing alongside Jay-Z and Coldplay.

"It's a really exciting time in America right now," he enthuses. "Dan ce

AIM Hospitality Group is the premier event planning, promotional and marketing company in New York City. We cater to all upscale nightlife venues, restaurants and hotel lounges. Let us help your venue achieve all revenue and target promotional goals.