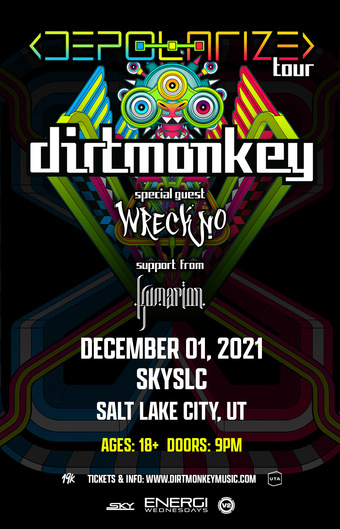 Get wonky with Dirt Monkey! 🐒 At Energi Wednesdays December 1st, he will be pumping out all his best tunes on the SLC stop of the 'Depolarize Tour'!

DIRT MONKEY— aka Patrick Megeath, is smashing. With over a dozen recent high-profile releases, and a stacked tour schedule already in full effect, a new era has begun, and more new tunes are on the way.

Over the past several years, Dirt Monkey has carved his uplifting, bouncy, and unique sounds into the Denver dubstep community, and onto the national touring scene. He finished last year with a strong release schedule: “Wubula” (SubCarbon), “Beef” w/ Bookie T (SubCarbon), “The Disciple Roundtable EP” (Disciple), and multiple releases on Wakaan. He took this brisk pace into to a fall tour with Bear Grillz and a Ganja White Night tour at the beginning of this year that sold out nearly every date.

He has worked and collaborated with a wide-variety of artists such as: Ganja White Night, DMVU, Illenium, Party Wave, Run DMT w Barrington Levy, AMP Live, and Jantsen. Dirt Monkey has performed at a countless number of breathtaking venues, including Red Rocks Amphitheatre, clubs in France, and Beta Nightclub in Denver, CO (where he has held a residency for the last 5 years). Also, for the past four years, he established and ran the record label, Kairos Audio, before handing it off to label partner and co-founder, Jantsen Robertson.

Fresh off a sold out co-headline tour with Subtronics, he used that momentum to go full steam into a headlining set at Shambhala. The wubs-master also made stops at EDC Las Vegas, Global Dance Festival, Nocturnal Wonderland, and Lost Lands and he’ currently in the middle of a 40+ date fall tour in support of his most recent release on Rise of the Octopeel.

Dirt Monkey has always strived to fuse the wonky, high-energy sounds of old school dubstep, and the crisp sounds of IDM. Now, he’s succeeding in bringing that sound to a global audience.