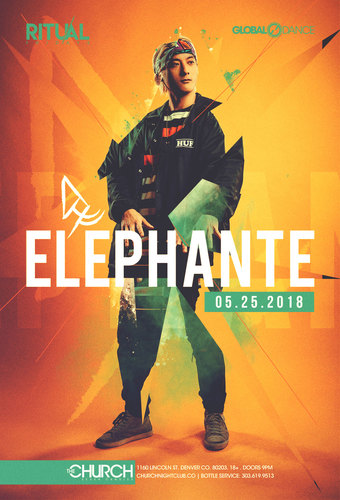 Elephante at The Church

Elephante at The Church

OK
Driven by an unwavering determination and passion for his craft, in just under two years, Tim Wu – best known as Elephante – has amassed a plethora of flawless productions that have earned him rave reviews from the likes of Rolling Stone, Sirius XM, DJ Mag and Billboard as well as respect from the cream of the dance music elite. His musical maturity and innate ability to create genre-defying hits time and time again could have him easily mistaken for an artist way beyond his years and has seen the dance pop prodigy win the hearts of legions of fans across the world. Hailing from Ann Arbor, Michigan, Tim began his musical career as a classically trained pianist and singer-songwriter, playing in bands in high school and college. Graduating from the worldrenowned Harvard University, soon after taking his first desk job, Wu soon realized that the corporate lifestyle was not for him, spending every waking hour producing music to admittedly keep himself sane. Finally embracing the ‘Elephant in the room’ that was his desire to break free from the monotonous 9-5 routine, Wu set his sights on the dance music sphere and Elephante was born - quite literally giving up his day job in order to hone his craft and make his mark as one of the most innovative progressive and electro house producers around today. Releasing his debut independent single ‘Shake The Earth’ in November 2014, Elephante went on to release his first label single ‘I Want You’ back in June 2015, reaching 1.5 million Spotify streams in less than two months and earning comparisons with the likes of Alesso, Madeon and Avicii. Stepping up to remix duties for everyone from Lorde and Katy Perry to Dirty South and Galantis, Wu achieved a string of Hype Machine #1s for his efforts and has gone on to receive support from major dance music players including Martin Garrix, Tiesto, The Chainsmokers and Morgan Page to name just a few. In October 2015, the burgeoning star released his third original production, ‘Age Of Innocence’. Released independently as a free download, the single achieved unprecedented success, reaching #18 on the Billboard Dance/Club Chart and was even added to rotation on Sirius XM BPM, Music Choice and iHeart Evolution – no mean feat for an independent release. With over a million plays on Spotify alone, the single caught the attention of Armada Music who snapped it up for rerelease in January 2016. When it comes to world-class productions, Wu is well and truly in a league of his own, singlehandedly breathing life into the electronic music scene with a host of impeccable releases. Proving there are no limits when it comes to his creative capabilities, over the last year Wu has showcased his diversity as a producer, deftly switching between the distinctive progressive house sound that has earned him the respect of some of the biggest names in the business, to experimenting with stomping future bass curveballs in the form of ‘Black Ivory’ (February 2016). Going back to his roots in March, Elephante dropped ‘Closer’ ft. BISHØP – a piece of pure progressive house perfection that has since garnered over 5 million streams on Spotify and earned spins on Sirius XM BPM and iHeart Evolution, propelling the song to a Top 20 chart spot on dance radio. Flexing his creative muscles once again, July saw Wu explore yet another side of his musical personality with the release of the captivating electro pop infused single ‘Catching On’ ft. Nevve, a record named ‘Best of the Week’ by Apple Music. The release of his inaugural ‘I Am The Elephante’ EP in September 2016 heralded a new chapter in the young producer’s career as he charted alongside some of dance music’s finest. The EP, which debuted at #2 in the US Dance Album Charts on iTunes, and has so far accumulated over 15 million plays on Spotify as well as support from Billboard, Beats 1 Radio, This Song Is Sick, Proxmity, Mr Suicide Sheep and many more – no mean feat for an independently released project. Having caught the eyes – and most importantly ears – of talent and tastemakers around the world, it was only a matter of time before demand for Wu’s live shows prevailed. Signed by CAA, Spring 2016 saw Elephante take to the road for an extensive tour of North America, featuring sold out shows from Boston to Jacksonville to Ohio to Vancouver, not to mention a dozen stops on college campuses along the way. Currently in the midst of his biggest ever tour to date, the ‘IATE’ tour will see him play 30 dates in 3 months, including sell out shows in Boston, Dallas, Santra Barbara, New York City and Sacramento, and will see him play major venues such as Omnia (San Diego), Hakkasan (Las Vegas), Create (Los Angeles) and Marquee (New York) – to name just a few. Earning a prized spot at Billboard’s Hot 100 Fest last summer, offers have continued to roll in with appearances at festivals such as Ever After Festival and Hangout Festival just a few announced so far for this year. Whether he’s crafting originals or whipping up remixes for the A-list, Elephante has rapidly carved a name for himself as one of the most exciting producers on the scene of late. Demonstrating a diversity that has seen him achieve over 45 million SoundCloud plays and a staggering 100 million total digital streams over his relatively short career to date, with demand for his unique sound reaching unprecedented heights last year, its safe to say Elephante’s star is most definitely on the rise.