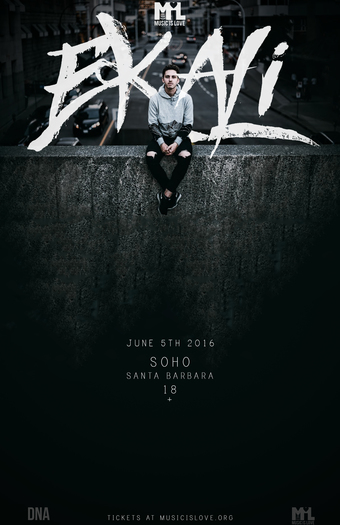 TICKETS AVAILABLE AT THE DOOR $$$$ ONLY

"Ekali, a Vancouver born and raised DJ with a knack for adding musical color to the world around him. His sounds are unique, with an effervescent blend of chilled out music to songs that will have you making those weird ‘YAAAAS’ faces when you hear something that just bangs. (Don’t act like you don’t know what I’m talking about)...When he isn’t touring, Ekali spends his time at the Red Bull Academy for Music in Tokyo, Japan."

"Like many of the producers he has collaborated with over the past year, Ekali’s music has spread and reached a wide audience on his Soundcloud. Songs like his remix of Tinashe’s Drake cover, “Days in the West,” and an “in progress” EP with Sydney-based aywy., have earned him thousands of plays and followers in a short amount of time. Just as much, the affirmation has encouraged him to continue producing, and his boundless potential is palpable…”

The aywy. collaboration got him an invitation to global collective, Flow-Fi, one of the internet’s most exciting new electronic music labels, which he’s part of in addition to Vancouver’s local Chapel Sound. Both groups represent the vast ambition and reach Ekali has and will continue to have, and as the only Canadian participant at this year’s RBMA, he’s no doubt a rising star in Canada’s thriving electronic music scene, which seems to be currently centered in Montreal.”