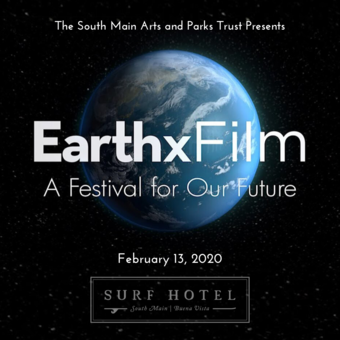 The South Main Arts and Parks Trust Riverside Stories film series continues with EarthxFilm!
EarthxFilm showcases films and emerging media that explore conservation, climate change, and the environment while honoring the heroes working to protect our planet.
Join us for an evening of activism, discussion, and support the works of cutting edge documentary films.

OK
Our Riverside Film Series continues with the EarthxFilm on February 13th at the Ivy Ballroom!

Shorts:
Feel of Vision:
Lonnie Bedwell is a downhome Indiana boy, a family man, former Navypetty officer. Not your typical extreme adventure athlete. But after he was blinded in a hunting accident, Bedwell discovered a new freedom and possibility in whitewater kayaking. And it wasn’t long before he wasshattering boundaries. Bedwell became the first blind person to kayak the entire length of the Colorado River through the Grand Canyon, and he has paddled in rivers from Wyoming to Pennsylvania. But his biggest accomplishment is encouraging other blind individuals to overcome their fear, get in the water and taste the freedom of rivers.

Grizzly Country:
When Doug Peacock returned from serving in Vietnam, he was broken. So he went to the only place he felt comfortable: the wilderness. And slowly, he found solace in the hulking, powerful, humbling presence of grizzly bears. “Those bears saved my life,” he says. In debt, Peacock devoted his life to observing, writing about and fighting for the pro-tection of grizzlies and their habitat. Today, the man who inspired Ed Abbey’s George Washington Hayduke character is living proof that nature heals. “It’s the best cure I know for the metaphysical icky-poos.”

Feature Film:
The River & The Wall:
In his last feature-length film, Unbranded, Ben Masters set out to cross America on wild mustangs in an unforgettable journey across public lands.In his latest film, he sets out with an equally audacious and challenging plan: to navigate 1,200 miles of the border between the USA and Mexico on horses, mountain bikes and canoes. While everything the native Texan does involves some sort of adventure, his real purpose in The River and the Wall is to explore the wildlife across this complex and diverse terrain, and understand howit would be affected by the wall proposed by President DonaldTrump. The film provides an different layer to the debate ragingfrom Washington, D.C. to El Paso and beyond as Masterspaddles, pedals and rides his way through this thorny issue.