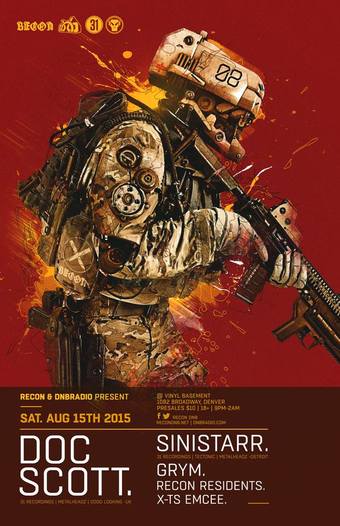 From the birth of drum n bass to where it is today. From its transitions from rave to hardcore, jungle-techno to tech-step to DNB, UK based, to a global scene and industry.

Doc scott has seen it all and been there for the entire journey.

A true veteran and leading tastemaker in D&B, Doc Scott has been an essential and pivotal figure in the scene since before its inception and continues to push things forward. Founding member of ‘A Bunch Of Cuts’, his DJ sets in the mid-90s became legendary, notably at the Metalheadz Blue Note sessions and ‘Speed’. Although primarily a DJ, his productions are definitive classics within the scene, such as ‘Here Comes The Drumz’ on Reinforced, the first ever Metalheadz release ‘VIP Drumz’, to the more mellow sounds of ‘Tokyo Dawn’ on Good Looking Records. His own label 31 Records, sparked by Scott’s ground-breaking ‘Shadow Boxing’, has also been a hub for new talent, pushing some of the biggest artists today in their early days. Having recently re-launched the label, Om Unit’s remix of ‘Shadow Boxing’ is the first release of 2014, with many others to follow. The New Year also marks a fresh start for Doc Scott, as he makes his long awaited return to the studio.

Dj/Producer for 10 years, born and raised in Detroit. I've written mainly drum & bass for various labels such as Goldie's Metalheadz imprint, Hospital, Renegade Hardware and many other labels that do strictly drum& bass, but have recently branched out to writing many different tempos for various labels like SMOG, Loose Squares and Pinch's Tectonic.

In late 2012 I joined the Urban Tribe project with Stingray, and other contributors to this project are Moodymann, Carl Craig, and Anthony "Shake" Shakir.

All in all, I'm tapping into new sounds as much as I can...!

Slightly higher at the door.