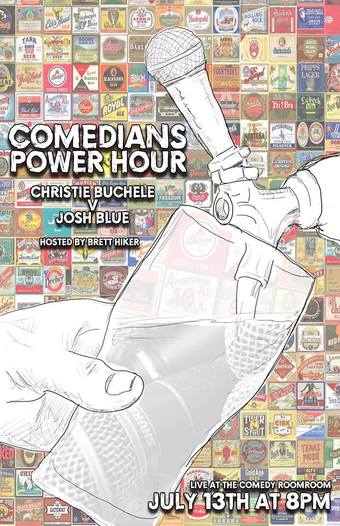 Internationally touring headliner JOSH BLUE (Comedy Central Presents, Last Comic Standing, Late Late Show with Craig Ferguson, Mind of Mencia) goes head to head with Denver favorite and fellow Palsied-American, Christie Buchele (Comedy Works, Pussy Bros., Empty Girlfriend Podcast) in a Battle of the Funniest. We'll find out whose jokes hold up in a brutal drinking game! Who will take home the CPH Championship Belt?? Will it be the seasoned comic with tv appearances under his belt? Will it be young and feisty up and comer who has defeated Josh in battle before? Will YOU be able to keep up with the drinking pace from your seat??? Find out 8pm, July 13th! Tickets are just $7 online, $10 at the door. See Josh Blue up close and personal like you've never seen him before, in Denver's most intimate comedy setting!

"What is Comedians' Power Hour?" you ask?The Power Hour is an immature college drinking game where a person attempts to drink a shot OF BEER every minute for an hour. "COMEDIAN'S POWER HOUR" is a comedy show originating in Albuquerque, NM and now with offshoots in (NYC, Denver, Texas, Florida, etc.). It involves 2 chuckle-smiths going head to head making this classic drinking game a comedy competition.Every show is different but a typical CPH looks like this: -BOTH COMICS START BY CHEERSING THE AUDIENCE AND TAKING A DOUBLE SHOT OF BEER-Both chuckle-smiths trade off doing 2 minute sets of stand-up. HOWEVER... between each set both comics take A DOUBLE SHOT OF BEER
As the show goes on, comics run into strategically placed challenges leading to SHOTS OF LIQUOR for the runner up.
Challenges play into their intoxication level and range from:
- 2 Minutes of Doing Each Other’s Material
- Give your competitor a Best Man Speech
- Debates!! (Star Wars vs Star Trek, Soup vs. Chili, Mormons vs. Jehovah Witnesses...)
- Etc, Etc, Etc...

You see how it goes.... Challenges change every show and usually end with something really unfit for a person who is just finishing a drinking contest.
("What sort of challenges happen at the end?” you ask? You’ll just have to come to the show...)

At the end the winner is awarded the infamous Power Hour Championship Belt. And the state lets the losers keep their kids.

A hole-in-the-wall comedy club inside of Lodo's most relaxed tequila bar, Comedy RoomRoom serves up fresh local standup comedy every Friday evening, and select Saturdays. Or stop by our late night Thursday open mic and try your hand onstage. No matter what night you come, there are cheap drinks, good food and lots of friends New and Old!