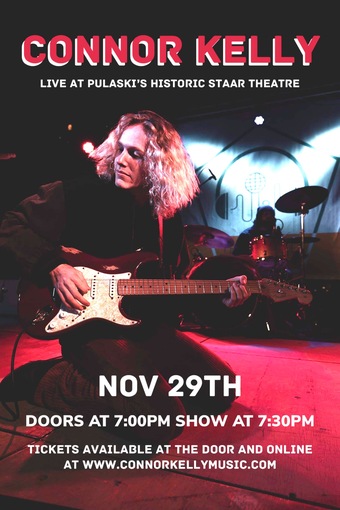 Pulaski, Tennessee is a second home to Rock and Roll musicians Ben and Connor Kelly. They can hardly wait to rock the STAAR Theatre on November 29th!

OK
Connor Kelly is an artist with an old soul and a passion for authenticity. While Kelly’s sound normally falls under the rock ‘n’ roll genre, he is not one to categorize the music he makes and isn’t afraid to deviate from the norm. With a full LP and a handful of releases available now, Connor’s music appeals to the people in a style that is nostalgic to old age rock, while also introducing his own unique approach. Much like his releases, Kelly’s live performance is electrifying and timeless. Connor and his band of long time friends have played shows for crowds all around the US in a plethora of cities and states. With a contagious energy radiated from jaw-dropping progressive jams and stellar guitar work from his blood brother and co-writer, Benjamin Kelly, a show is pieced together that brings songs to life and never fails to entertain. Look out for Connor Kelly’s upcoming releases and shows as he tours the US and continues to do something new with his music every day.