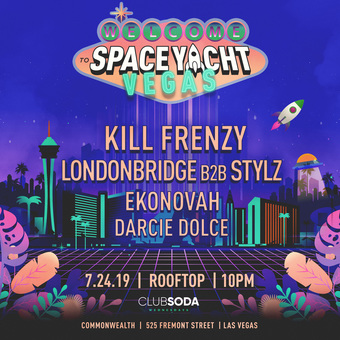 Club Soda x Space Yacht w/ KILL FRENZY
LondonBridge B2B STYLZ, Ekonovah, Darcie Dolce
7.24.19 | Rooftop 10PM
Kill Frenzy (aka Sébastien) is a young DJ/Producer from Belgium. He worked his way into the production game rather fast after at age 17 discovering the fast dirty booty house tracks coming from Chicago and Detroit. He started to make his own nasty tracks and was one of the first European juke (booty house) producers to release several booty house tracks on the infamous Dust Traxx label (Chicago) and the legendary DJ Godfather’s label Juke Trax (Detroit).
Not wanting to limit himself to just one style he started working on various other styles. His first ep was picked up immediately by Hervé of The Count of Monte Cristal with his Cheaper Thrills (UK) label. He continued to release trax and remixes on various different labels, flirting with different genres while at the same time keeping that original ghetto house and booty flavor.
Hey
In 2012 Kill Frenzy debuted on Claude Vonstroke’s label Dirty bird with Booty Clap (“Make that Booty Clap featuring DJ Funk ”) which became a track widely known across the world. To put it in the words of Dirtybird: “To have a track that gets played by everyone all the way from Soul Clap to Skrillex shows Kill Frenzy’s ability to bridge the gap between genres, cliques and crews around the world”. Going further on this sound he released ‘Go to the Mo’ EP ft Sacha Robotti on Dirtybird. This new EP pushes even further into that original sound.
Tour wise Kill Frenzy recently just came back from his first U.S.A tour where among other party’s he played at the Dirtybird Party @ Mezzanine S.F and Hard Summer L.A., Blue Detroit. In Europe he had the privilege to play at gigs such as Tomorrowland, Pukkelpop, Social Club, I love Techno, Fuse, Extrema outdoor, Amsterdam Dance event @ Air, Groove City, Les Ardentes, Laundry Day…
So look out for his ass shaking, titty bouncing, bass in your face music. Hope you are ready to put on a smile, shake your ass, get freaky and have a good time!
Guest List - Limited
Online GA - $5-10
Doors - $15+
Bottle Service (4 People) - $240
Commonwealth
525 Fremont St
Las Vegas NV 89101
#CLUBSODAVEGAS
Nightlife Festival Concert