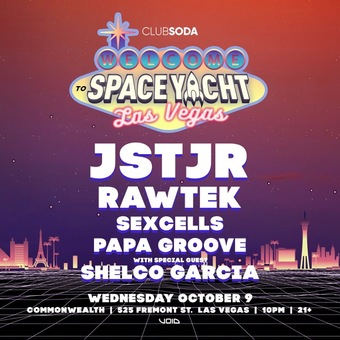 Every month, one of the hottest new party brands--Club Soda--invites in one of the US' most influential new music curators--Space Yacht--to craft a lineup on its iconic Wednesday night. On this particular edition, we bring you JSTJR who has had a massive past 12 months, and in many more aspects than one. Having sold out multiple shows around the US, JSTJR has quickly become one of the champions of moombahton. Artists from all around the industry, including Diplo, Kayzo, and 4B have shown immense love, not to mention his lively music production ethic which gets the dance floor shaking. We're excited he has agreed to take the stage as our surprise headliner in Las Vegas.
RAWTEK will also be joining us this wednesday in vegas. most commonly known for his style of #lionsound, you can grasp his expansive taste through his fusion of tribal, jungle and latin movements with modern electronic dance music elements. His production prowess has earned himself major support from one of our favorite labels, Barong Family, as well as heavy hitter Flosstradamus. we're very excited to see what he brings to LV.

next up we have las vegas' very own SEXCELLS. He’s a space yacht returner who we’ve gotten to know over the past year and has shown incredible promise as a producer in the vegas scene.. he has released music on one of our favorite global bass labels, La Clinica, and we’re excited he has joined our roster for this showcase.

last but not least, we have PAPA GROOVE, whose name encapsulates the type of music he produces. from his remixes of popular hip hop tracks such as pure water by migos, to his original, groovy production style, as shown in his track ‘once again,’ he has slayed the range of each genre he’s dabbled in. he'll definitely rinse all of the heaters.

and to make the night even more special, we will be inviting one vegas-based DJ to join the showcase as an ode to the city’s growing population of rising superstars. check our socials to find out who won!