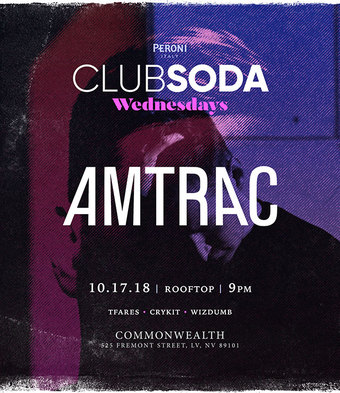 Amtrac, real name Caleb Cornett, has been pushing his creative limits as a producer, DJ, musician and sometimes-vocalist since 2008. The multi-talented artist can electrify an audience, be it with a moving live music performance or by working danceflo..

Raised in Morehead, Kentucky on a diet of deep cuts by Pink Floyd and Led Zeppelin, he was lured to the dance realm by crossover acts such as The Prodigy and Chemical Brothers, whose influences show in his debut LP, Came Along (2010), a 13-track adventure awash in post-punk influences and indie dance charm. From there, he branched out even further with Hey There Kiddo (2012), an all-sample opus with deep disco roots inspired by one of his favorite albums of all time, Since I Met You by The Avalanches; and his 2012, The Scheme, explores underground deep house vibes with dark, funky rhythms. Most recently he has released his single “Those Days” featuring a Stevie Wonder vocal was released on highly respected dance label Toolroom Records.

But as impressive as his original works may be, one can’t discuss Cornett’s body of work without mentioning what may well be the calling card of his career: the remix. An Amtrac remix has become a coveted commodity in today’s music business – from Majors like Interscope, Warner Bros, Def Jam & Sony to tastemaker labels like Fools Gold, Kitsune, Toolroom, Defected and Ministry of Sound, along with a host of popular artists including Ellie Goulding, Alesso, Elliphant, Axwell, Ingrosso, Two Door Cinema Club, and Kaskade have all requested the Amtrac treatment, and each time he’s delivered (and then some).


Never content to settle, Amtrac’s musical mood and influences change with each passing season. His ambition and curiosity keep him locked on the edge, always happy to experiment with new techniques and sounds. His music is what he feels in the moment. Simply put, his constant evolution comes from a hatred of boredom and a love for his labor. It’s just not in his nature to stagnate.