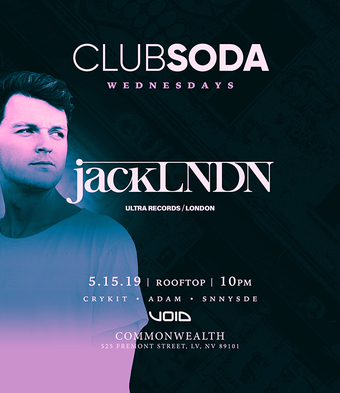 JackLNDN is one part classical technician and two parts main room club surgeon. He's simultaneously a mixture of centuries of European musical heritage and a sneak preview of the future. As a producer and DJ, he has quickly established himself as a character whose work is quickly drawing attention for its freshness and whose potential is seemingly endless. In his twenty years on earth, LNDN has spent more time performing and playing music than most do in a lifetime.

Born in the early 90s, Londoner Jack spent the majority of youth attending Windsor Castle for the Queen. He rigorously trained in classical music, developing a slew of skills: choral singing, conducting, writing, and performing cello, piano and guitar. The immersive education required performing at "8 events a week, 14 hours of rehearsals a week and 30 minutes of training every day before breakfast. It was like boot camp," he admits, "but so rewarding."

Then, he met dance music. On a holiday to Ibiza with a friend, LNDN, a teen, experienced proper clubbing for the first time. He reveals, "We didn't really know what to expect. I went to a club - saw Fatboy Slim at Space. He was standing in for Carl Cox. Every night I went to every single club. Then I started looking hard at the scene," and began DJing from there.

On his first DJ gig: "I blagged my way into the job - it was a week before NY in Switzerland - I was just talking shit. I learned the basics of DJing in a week. Another guy from a bigger club liked what he heard and asked me to be their resident. It was a ski resort."
When the ski season finished, he returned to London and was intent on experimenting in the studio and as a DJ. He entered the British Student DJ Championships and got invited to the finals in Ibiza. Soon after, he began spinning student nights at Fabric and hosting his own weekly nights. He has a photographic memory when it comes to records. He "knows every record inside and out" and would "never play a record he doesn't know, like some track he just downloaded that day and hasn't even listened to yet." He may be young, but he has the elder sense of purism usually reserved for jocks twice his age.

"Doing shows in my hometown was a huge deal for me" he confesses. "I was in the booth with some of my heroes watching and learning new tricks all the time". LNDN has already shared stages with; Annie Mac, Zane Lowe, Sub Focus, Kissy Sellout, Ms Dynamite, Doorly, Chase & Status, Pendulum, Mistajam, Skream, Nero, Example, Jaguar Skills, Crookers, Sinden, Zomboy, Joy Orbison and a fair few more.
On the production side, he started gleaning tips from friend Harry Wolfman and combined that with his knowledge of Logic and other bits of his training. Ever since, he has been slaving away in the studio, developing a variety of his unique strains of dance music. The linchpin of the sound has always been house, but filtered through an ever-evolving set of lenses: progressive, pop, jazz, and beyond.

Young JackLNDN is now poised to move large congregations himself. 2013 has already been a big year for Jack, winning Cazzette's worldwide remix competition and being selected for a featured Spotify release. The track 'Weapon' beat hundreds to claim the honour of the Official remix. Progressive house legend Dinka has also had the official remix treatment from Jack with her anthem 'Polarity'. The coming months crucially bring the release of his debut EP. This classical-turned-dance prodigy has got the musical chops and attention to detail so often lacking in EDM. To call JackLNDN a bright, young voice might just be the understatement of the year.
Guest List - Limited
Online GA - $5-10
Doors - $15+
Bottle Service (4 People) - $200
Commonwealth
525 Fremont St
Las Vegas NV 89101
#CLUBSODAVEGAS
Concert Festival Nightlife