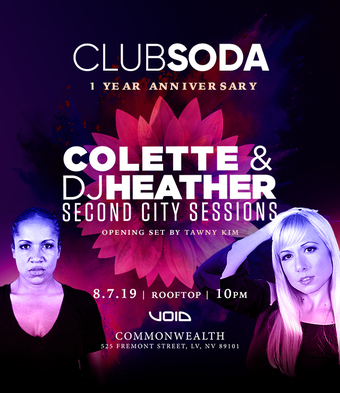 COLETTE & DJ HEATHER join forces for Second City Sessions, bringing heat to dance floors throughout North America with their slammin' Tag Team show!
Colette: DJ, producer, vocalist – Colette has grown from an integral part of the Chicago underground into a breakout musical triple-threat. On the decks, Colette combines the tunefulness of classic pop songs with the thump of classic house of her hometown. Colette's released four albums since 2005: HYPNOTIZED (2005), PUSH (2007), WHEN THE MUSIC'S LOUD (2013) and RETROSPECTIVE (2017). "Hypnotized" was the most downloaded House dance album on iTunes (June 2005), Billboard named "When The Music's Loud" one of the top 20 albums of 2013 and Thump/VICE named it one of the 99 greatest dance albums of all time. Her new release with Gettoblaster “Butterflies” is out now with remixes to come.
DJ Heather: Widely regarded as one of the premier selectors in the nation, DJ Heather demonstrates her skills and sharp deck acumen for the masses throughout Chicago and the world at large with verve and undeniable talent. Named one of Chicago’s Top Forty-Five Artists alongside Kanye West, Billy Corgan and Green Velvet, with over 20 years of experience behind her, DJ Heather has grown to become one of the Windy City’s main DJ exports. She is an artist who defies conformity, defines quality and continues to nurture her solid skills for soul music of the technological generation. New releases in the works for Green Velvet and on her label Apollo.
Guest List - Limited
Online GA - $5-10
Doors - $15+
Bottle Service (4 People) - $240
Commonwealth
525 Fremont St
Las Vegas NV 89101
#CLUBSODAVEGAS
Nightlife Festival Concert