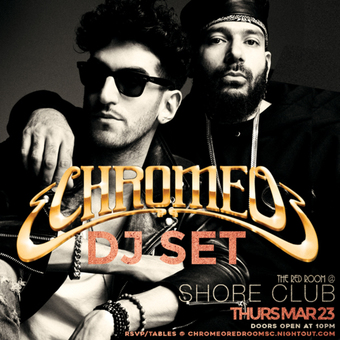 World leaders, powerful CEOs, and assorted other fat cats could learn myriad lessons from Chromeo, but the number one tip that Dave 1 and P-Thugg have is this: Know thyself, know thy vibe, and stay thy course. The rest of the population will catch up. What this means is that Chromeo is really good at being Chromeo. The mission, the package, the vision—it’s been a straight shot of pure intentionality from the jump. These Chromeo dudes? They have the whole being-these-Chromeo-dudes thing totally wired.

And with the benefit of blessed hindsight, we can all see now that Chromeo stuck to it with the natural doggedness of the soulful heirs that they are. Funk a game plan—these guys had a ten-year battle strategy. When they released their first album in 2004, Rick James was still the Antichrist to all but the enlightened. Fast forward to today, and ‘80s funk—which makes up a major part of Chromeo’s DNA—is all over the charts.

So it’s the perfect time for a fresh dose of the real stuff and—lo and behold—Pee (still looking a smooth criminal in a Coogi) and Dave (ever the Semitic/Gallic heartthrob in tight pants) are back. We are officially on the cusp of the Canadian funk lords’ fourth album’s release. It’s called White Women and it’s a doozy. As a work of cultural theory, it posits that we are living in a post-nostalgia age. All previous genres and styles of music now coexist within a singularity of moves and gestures. (Ouch, sorry, got possessed by a cultural studies prof. for a second there… but the foregoing is true of Chromeo, just FYI.) More importantly, as pure entertainment, White Women perpetuates and elevates Chromeo’s existing blueprint: sexy funk, ass-targeting beats, melodic honey, and smart lyrics about the foibles of contemporary love.

Dave 1’s words continue to turn urban music clichés on their heads. On “Jealous (I Ain’t With It)”, a Chromeo crossover comet if there ever was one, our arch antihero witnesses his ex in the arms of other guys… wearing the jacket that he bought her. Conversely, the pristinely produced “Over Your Shoulder” is a paean to the insecure. You’re all beautiful, ladies, is the message; don’t even sweat that body-image noise. And “Sexy Socialite” is a warning to the highhanded party girls of the early twenty-teens. Check yourself, sayeth Chromeo.

White Women is the band at its most ambitious, with both the pop and the muso elements of Chromeo pushed into the red. On the hooky side, we’ve got instant classics like the soaring “Come Alive” and the pulsating “Frequent Flyer” which offer moments that would make Hall & Oates and Wham green with envy. On the crate-digger side, Dave and Pee employ an unprecedented analog arsenal that would make Kraftwerk drool. Mtume’s female vocalist croons on more than half the album. Steely Dan’s string conductor pops up on the progressive album closer “Fall Back 2U.” Try all that on for size, nerds.

But for all that 80’ talk, White Women, more so than any other Chrome-opus, is firmly grounded in pop’s present. It features some stellar cameos, too. Solange belts it out with Dave 1 on “Lost On The Way Home,” Ezra Koenig of Vampire Weekend contributes the piano-led, heartstring-pulling intermezzo “Ezra’s Interlude,” and Toro y Moi dives into the undiluted electro-funk of the aforementioned “Come Alive.”

2014 happens to be the Year of the Horse, which makes sense because Chromeo are about gallop in on shining white steeds to delicately trample all of us with their sublime sound. The weather is perfect; the water is warm; the people are waiting. Here comes White Women to remind everyone else just how this shit is done.

RSVP is Required but does NOT Guarantee Admission.  Admission based on Capacity and is at the sole discretion of the Venue.

Chromeo is an electrofunk duo based in Montreal, Canada and New York City. They are P-Thugg (Patrick Gemayel) on keyboards, synthesizers and talk box, and Dave 1 (David Macklovi... View Artist

Shore Club, an Art Deco labyrinth of gardens and alcoves in bustling South Beach, brings a fresh, modern vibe to the dynamic energy of the city, offering an exciting and playful experience at this iconic beach-side resort hotel. The spacious rooms offer an incomparable amenity - a stimulation of all five senses as backdrop provides a quintessential combination of ocean sights, smells and sounds and the evening city lights. The true heart of the hotel, Shore Club’s spacious lobby, provides guests and day visitors with a comfortable and chic hangout spot, and flows seamlessly and mysteriously from indoor to outdoor spaces. Guests have multiple options to explore within the hotel including Skybar. This garden-like patio offers an intimate setting for guests to drink, lounge and relax under Miami’s starry sky until the late hours of the night. Beyond the columns that border Skybar’s whimsical enclave lies Shore Club’s brand-new signature Mexican restaurant, Diez y Seis. This contemporary Mexican space offers indoor/outdoor seating for breakfast, lunch and dinner with the most picturesque backdrop overlooking Shore Club’s renowned infinity edge pool. Designed to bring balance to body, mind and soul, guests can relax at The Spa at Shore Club taking in the views of the ocean on their outdoor terrace sanctuary or book a revitalizing deep tissue massage in one of The Spa’s renewing treatment rooms. Shore Club is located just steps from the excitement and shopping of the Art Deco District, Ocean Drive, Lincoln Road, South Beach nightlife and Espanola Way.