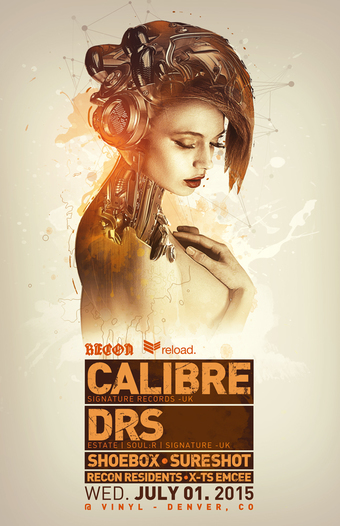 Dominick Martin aka Calibre has been responsible for some of the most beautiful tracks in drum & bass to date and continues to drop jaws worldwide with his sublime and sultry productions. From his first full length LP on Creative Source to his latest album "Condition" on his own label Signature, Calibre's sound has progressed taking in elements of jazz, funk, dub and techno but lost none of it's soul. His influence in drum & bass has been profound yet Calibre continues to evolve as an artist, exploring new techniques and styles in his music. Having played all over the world from Belfast to Dunedin, Calibre certainly knows how to captivate a crowd. His sets focus primarily on the deeper, more musical side of drum & bass yet never disappoint the dancefloor. Each performance features a high percentage of his own original music, much of it never to be heard again, and each set cements his position as the undisputed leading light of the deeper side of Drum and Bass. Artists and DJ's from all corners of the electronic music spectrum constantly remark on Calibre DJ sets restoring their faith in Drum & Bass as a vital musical force.
https://www.facebook.com/pages/Calibre-Dnb
https://www.facebook.com/signaturerecordings

With a reputation now stretching well over 15 years, DRS is a truly versatile MC, host, lyricist and recording artist. Cutting his teeth and touring worldwide with the legendary Good Looking label, his soulful style on the mic and honest lyrics are unmatched. He’s been an integral part of the Soul:r camp, recording tracks with Mist:ical, Calibre, Marcus Intalex, and Lynx, appearing as resident MC for Soul:ution and A Bunch of Cuts. Demonstrating the versatility and wide appeal of his unique style, he became part of the Toddla T Sound System as Toddla T's official MC. DRS has gained further recognition through repeatedly winning ‘Best MC ‘at the DNB Arena Awards. On top of all these achievements, DRS is also head of the Estate Recordings label in Manchester, part of hip-hop crew Broke’n’English, and a respected recording artist in his own right, with a massive debut LP ‘I Don't Usually Like MC's But’ to his name, and another entited 'Mid Mic Crisis' on the way.
https://www.facebook.com/pages/Fams-of-MC-DRS