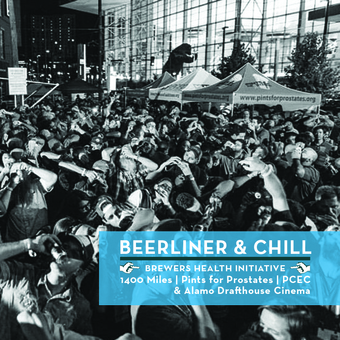 General Terms
Event has the right to ask you to leave or stop drinking at any time.
Refund Policy
All items are non-refundable.

We have partnered with Pints for Prostates and PCEC to give free men's health screenings! This is a simply blood test that checks your PSA, lipids, cholesterol, and glucosamine. This test is valued at $800. Get a test and you could win cool swag from YETI and get a specialty crafted Coffee from Wright Bros. Brew & Brew.

Alamo Drafthouse Cinema will be onsite selling food (cash only), and at night, watch their beer-tastic projections!

Come enjoy great Texas craft beer during our open hours. $10 daily wristband gets you access to some of Texas's top craft beers!

Rotating beers (final schedule will be available Tuesday, October 4th) will include:

1400 Miles, Pints for Prostates and PCEC

1400 Miles, Pints for Prostates and PCEC