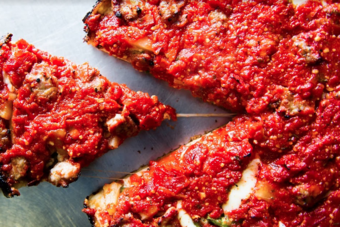 All the world really is a fair! The Chicago Brewseum is teaming up with Windy City Pie and the Olympia Tumwater Foundation to bring you a truly Chicago-style meal, a historic look at the world’s fairs that helped define Seattle, Chicago, and Portland, and a special surprise collaboration beer brought in from Chicago!

Over dinner, we’ll highlight how beer helped make these fairs unique. After all, the Century 21 Exposition gave Seattle the Space Needle, but there’s a reason you’d have passed a few Olympia Beer ads to see it. Chicago’s Columbian Exposition witnessed a bitter argument between brewers whose legacy can still be found in just about every liquor store and bar in the country.

One way or another, beer played an integral role in telling the contentious stories about American society that these fairs were designed to tell. And thanks to Windy City owner Dave Lichterman and the Foundation’s own Karen Johnson, this glimpse of the past includes a look at actual artifacts from multiple world’s fairs!

On top of that, we’re bringing in one of our historically-minded collaboration beers with us from Chicago. It’s so new and so exciting that we can’t tell you what it is just yet, but we’ll unveil this beer publicly soon and update this page in advance of the event. The best part: guests attending this event will be the first people west of the Mississippi to be able to try this beer!
Non Profit Food & Drink