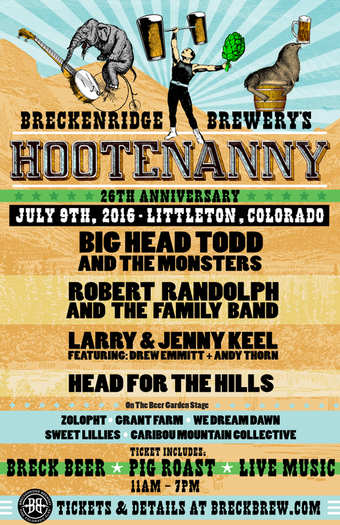 General Terms
ALL AGES SHOW. Must be 21+ to drink alcohol! Under 16 must have a ticket and be accompanied by a parent or guardian. Kids 12 and under get in free. Sorry, no pets.

Breckenridge Brewery's Hootenanny is an annual celebration of craft beer, live music, and barbecue. This year's event marks the brewery's 26th anniversary since its humble beginnings in the mountain town for which it's named. With two stages featuring national and local bands, the event goes from 11:00 am to 7:00 pm, rain or shine.

Discounted tickets to the after-party at Cervantes' Masterpiece in Denver (with performances by Robert Randolph and Zolopht) can be purchased NOW (see above).

*Price increases as each tier sells out*

As in years past, the Hootenanny will raise money to fight hunger across the nation, by donating a portion of the event's proceeds to Conscious Alliance.

NO PARKING will be available at the brewery. Shuttle services are provided. You can catch the shuttles and get dropped off at the following locations: Arapahoe Community College  and RTD Light Rail station (Santa Fe & Mineral), For Light-Rail Schedules: http://bit.ly/1ot7MLG