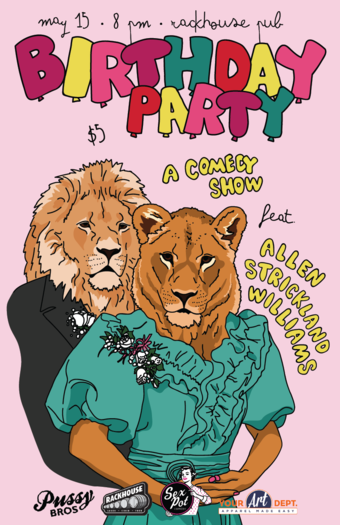 Allen is an impeccably dressed LA comedian who's performed at South by Southwest, Moontower Comedy Festival, Funny or Die’s Oddball Comedy & Curiosity Festival, the Bridgetown Comedy Festival in Portland, CROM Comedy Festival in Omaha, Comedy Carnivale in Salt Lake City, Hell Yes Fest! in New Orleans, and the RIOT Festival in Los Angeles. He's a member of the all dude sketch group WOMEN seen on IFC, Comedy Central and Funny Or Die. Oh, and you may have seen him crushing on Conan, no big deal.

He's been named one of Comedy Central's comics to watch, so you should probably come do that with us on May 15th.

Wear your best taffeta dress & boutonnieres (or be the cool kid who shows up to prom in jeans and a T cuz he's totally over high school) and DJ Erin Stereo will be pumping out the jams all night long. And what's a birthday party without cake? NOTHING! So as always, there will be cake. $5 at the door includes all this and your first drink! Doors & DJ at 7, show at 8!