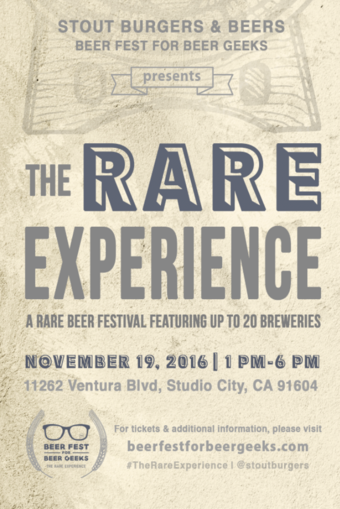 Age Restrictions
You must be 21 years of age or older to enter.

The Rare Experience beer festival takes place outside of Stout Burgers & Beers Studio City from 1:00 pm – 6:00 pm on Saturday, November 19, 2016. The festival features 20 breweries from around the United States pouring a variety of beers such as sours, barrel-aged and wild ales - all rare or unique one-offs. Both VIP and regular admission tickets are available to purchase (see ticket info below!).

Beer geeks will recognize a few of the more popular breweries attending the festival, including Deschutes, Logsdon, Allagash, Lost Abbey, Cascade, Almanac, Modern Times, Boulevard, Green Flash and more. Some of the rare or unique one-offs come from as close as Los Angeles (like Phantom Carriage Brewery) and as far as Connecticut (extremely rare OEC Brewing) and Nebraska (Nebraska Brewing Company).

No children or pets will be allowed admittance into the festival.

We invite you to enjoy the festival but please remember to DRINK RESPONSIBLY.

Public transportation to the event is highly encouraged.

All ticket sales are final.