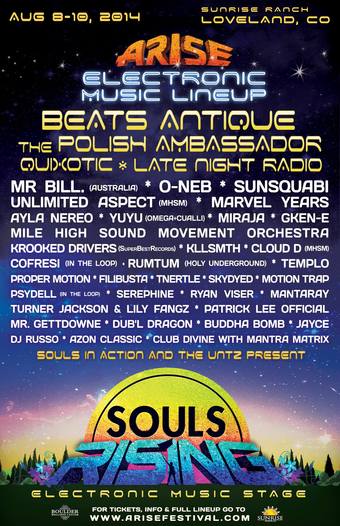 The 2nd Annual ARISE Music Festival will kick off this August 8-10 and showcasing a stellar lineup including Beats Antique, Galactic with special guests Chali2na and Lyrics Born, Grateful Grass featuring Keller Williams, Billy Nershi (String Cheese Incident) and Reed Mathis, The Infamous Stringdusters, The Polish Ambassador, Groundation, Tribal Seeds, Nahko and Medicine for the People, The Everyone Orchestra featuring Steve Kimock, Late Night Radio, and the return of Quixotic, among many other favorite performers.

Souls In Action Entertainment has teamed up with The Untz.com to bring y ou the Souls Rising - electronic music stage at Arise Music Festival in Loveland CO, AUGUST 8th - 10th. Nestled in a wooded area of the picturesque Sunrise Ranch, and smack-dab in the middle of the festival grounds, the stage will feature a tantalizing lineup of cutting-edge artists from close to home and around the globe including; Mr. Bill, O-Neb, Unlimited Aspect, SunSquabi, Mile High Sound Movement Orchestra, Marvel Years, Krooked Drivers and many more!  The Souls Rising stage promises to be the focal point for the EDM scene and anyone at Arise who wants to turn up, get down, and dance the night away.

The 3-day festival will also feature a selection of yoga and movement intensives each day, a mini documentary film festival, special guest presenters and activists, diverse interactive workshops, delicious food, local brews and fine craft vendors specializing in organic and natural products of all kinds. A special event for all ages, the ARISE Music Festival also caters to families with daily kid-friendly activities and programming culminating in a kid’s parade on Saturday evening.

SOULS IN ACTION ENTERTAINMENT, LLC. is a Denver based collaboration of young, hungry, like-minded, creative individuals from different backgrounds eager to create a better community though Music, Art, & Social Activism..."LIKE" our Fan Page for FREE TICKETS & exclusive updates for all of our events & the SIA artist collective!