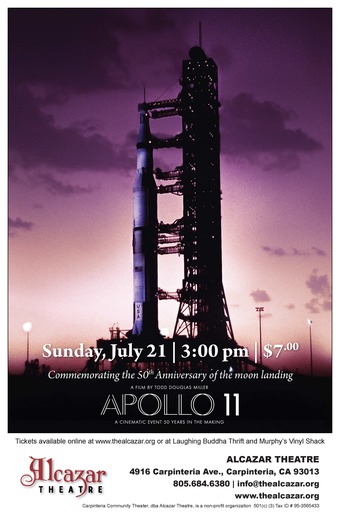 Commemorate the 50th anniversary of the moon landing with the film that's the next best thing to being there.

Alcazar Theatre
facebook twitter email
Director Todd Douglas Miller (Dinosaur 13) built his documentary, of the first moon landing, around newly unearthed large-screen, 65 mm footage that captured all aspects of the mission and then was forgotten. “ The new, never before seen footage, restored and reformatted in high resolution, provides a more intimate look into the mission than anything we’ve ever seen, from the lead-up to launch, to the eight long days in Mission Control, to the astronauts’ dramatic reentry and recovery. Among the movie’s credited cinematographers are astronauts Neil Armstrong,Buzz Aldrin and Michael Collins.

Apollo 11 is so immersive it feels as if you’re living the Apollo 11 mission. Aldrin says it’s the closest anyone has come to re-creating the real thing. Miller and his team also benefited from another unexpected find: more than 11,000 hours of undocumented audio recordings that captured dialogue from all key personnel during every moment of the mission.