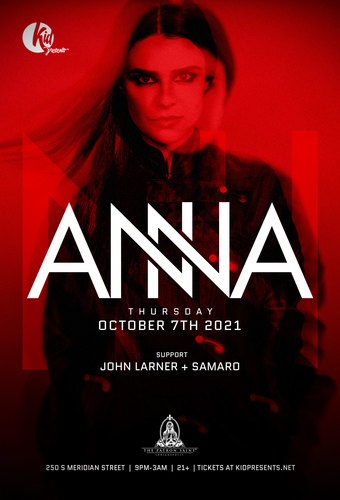 The last 18 months have seen the talented Brazilian-born artist ANNA reach new heights with productions such as ‘Hidden Beauties’ and her powerful remix of Jon Hopkins ‘Singularity’,garnering acclaim from every corner of the industry, and achieving large streaming numbers onSpotify.

THE last 18 months have seen the talented Brazilian-born artist ANNA reach new heights with productions such as ‘Hidden Beauties’ and her powerful remix of Jon Hopkins ‘Singularity’,garnering acclaim from every corner of the industry, and achieving large streaming numbers onSpotify. New music from ANNA has been huge in festival sets for many world-leading technoDJs all summer. Then there was the richly deserved Essential Mix for the BBC that started 2019off right, as the Brazilian distilled 20 years of DJing experience into an inspiring two-hour techno masterclass. DJ Mag rightly recognised her talents, putting her on the cover of their NorthAmerican edition in February, a nod to the breakaway impact she’s had on that region.

Today’s success has been two decades in the making, stretching back to the nightclub her father owned in the countryside outside São Paulo, where she honed her craft as a DJ from the age of14. Her journey since then has been marked by passion, hard work and unrelenting dedication to her craft. You can see this when she plays – a skilled and accomplished selector, her performances are energetic, engaging and captivating. Gigs at the legendary Warung, D-Edgeand Time Warp Brazil in her home country are the stuff of legends, while globally she’s in ever-increasing demand playing everywhere from Movement Detroit, Awakenings, Tomorrowland,DC10 and Block in Tel Aviv. For an insight into her talents, you only need to check her vinyl DJset for Cercle from last February, that’s already hit well over two million views. No surprise Mixmag heralded her as one of the best DJs of 2018 in their yearly wrap-up.On the production front, she’s dropped critically acclaimed music on virtually every significant label in techno, including Hotflush, Drumcode, Novamute, Clash Lion, Sapiens, Domino with her Jon Hopkins remix, plus a new original for Tale of Us on Afterlife. Her relationship with Kompakt continues to reap fruits. Following on from the success of ‘Hidden Beauties’ that was acclaimed by Pitchfork and judged one of 2018’s Top Tracks by Mixmag, she released the stirring ‘Remembrance’ EP, highlighted by ‘When I Am Only A Dream’. In August this year, she released a very special collaboration with Kittin titled ‘Forever Ravers’ – which is already being heralded as ‘techno track of the year’ by a number of media platforms and certainly an anthem for our times.