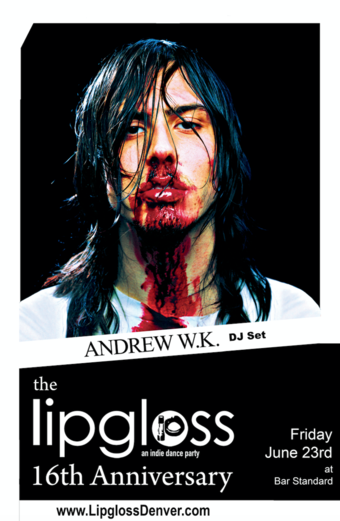 303 Magazine & Peligroso Tequila present:The Lipgloss 16th Anniversary Party feat.Andrew W.K. (DJ Set)w/Resident DJ's Boyhollow & DJ TowerThat's right. It's been 16 years since we held the first Lipgloss dance party in 2001. And speaking of "party," who more appropriate to help us celebrate than the king of partying himself, Andrew W.K.?To see more about Andrew W.K.'s intensely interesting life, visit his website or check out his wiki! http://www.andrewwk.com/
Lipgloss is hosted at Milk Bar every Friday night, but for this special event join us upstairs at Bar Standard.

Andrew W.K. is the KING OF PARTYING. Infamous for his bloody nose, famous for his high-life attitude, beloved for his songs like, "PARTY HARD", "WE WANT FUN", and "YOU WILL REMEMBER TONIGHT", Andrew's true will is to use all forms of entertainment to create feelings of pure joy, fun, love, freedom, and possibility.

Born in California in 1979, Andrew W.K. is a multi-faceted musician and performer. Starting his musical career at age 4 with classical piano lessons, then exploring experimental and fine art interests, Andrew went on to create his own brand of extremely high-energy rock 'n' roll. His father, James E. Krier, is a Law Professor at the University of Michigan, and Andrew grew up in the open-minded Midwestern city of Ann Arbor. At age 18, after being accepted into The Art Institute of Chicago, Andrew decided instead to move to New York City and pursue art and music on his own.

With the release of his first full-length album in 2001 - the controversial, "I Get Wet" - Andrew was quickly recognized not only as a powerful musical performer, but also as an exhilarating and uplifting personality for a new generation. Using his feel-good abilities, Andrew released many more albums, singles, videos, a DVD, and expanded his work to include T.V. shows on MTV and VH1, motivational speeches at Yale, New York University, The Cooper Union School, and Carnegie Mellon, and a monthly advice column and book in Japan. As he continued to record and release his own music, he also began producing musical recordings for other artists, including the Grammy Award nominated album, "Repentance", for reggae music legend, Lee "Scratch" Perry.

2010 and 2011 will see Andrew hitting the road with his full band, as the headliner on the entire summer 2010 Warped Tour. This will be Andrew's 2nd time on the Warped Tour, and his first North American concert tour since 2005, when a variety of legal and personal issues first turned Andrew's life upside down and took him off the road. With his past behind him, Andrew is very excited to finally have another chance to play with his band and bring the party back stronger than ever.

Due to the variety of his pursuits, Andrew continues have an impact on an extremely diverse range of mainstream and underground culture. As Andrew continues to push the boundaries of entertainment and his own life, he brings into play a wide range of ideas, all the while working to create a joyous experience for his audience. Andrew lives in Manhattan, New York City. He's currently recording a new rock 'n' roll album and a book for 2011. He has never been more ready to party.