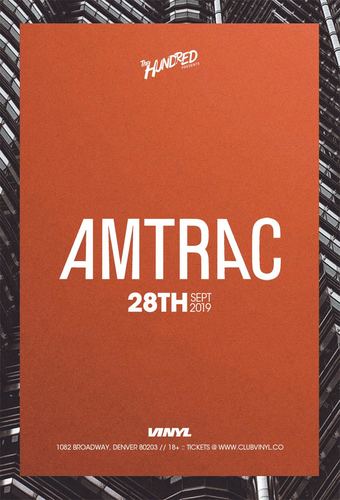 OK
The name Amtrac has become synonymous with many titles – producer, DJ, multi-instrumentalist & sometimes vocalist – yet if there’s one defining ethos behind Caleb Cornett’s burgeoning Amtrac project, it’s a relentless commitment to authenticity.

Since making his formal debut onto the scene in 2011 with his album Came Along, Cornett has gone on to work with many acclaimed imprints, all while performing at festivals around the world and racking up millions of streams on his tracks.

Having recently established his own independent label Openers, Cornett has found himself riding a new wave in his career. With a burgeoning label at his fingertips and an upcoming full length LP due at the top of 2020, Cornett is poised to cement himself as one of the most forward-thinking producers and A&Rs of the like.
Live Music Nightlife Concert