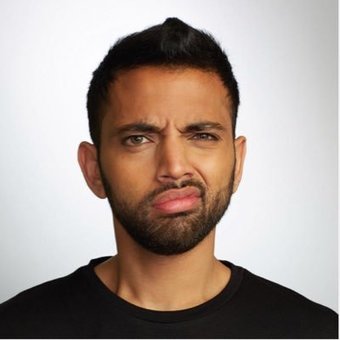 Everyone is socially distanced in their own pods The fierce pride in India is real, although it’s worth noting Akaash’s middle school principal thought he was Mexican for all three years. Such was life growing up in suburban north Dallas. Home.

Akkaash left home to help people.  He wanted to be a doctor like his uncle and graduated pre-med from Austin College.  Naturally, the next step was to move to Los Angeles and become a comedian.

There is no easy explanation for this leap of faith.  It was an idea that always flickered in his mind.  Even when he was young, Akaash saw comedy differently.  He appreciated the nuances and broke it down to a science, fascinated by what worked and what didn't.
The first time he performed in front of his friends in high school, he bombed.  Of course, it's a little more disheartening when the laughs don't come while you happen to be on the mic at The Comedy Store in L.A.
You know, The Comedy Store, stomping of Pryor, Seinfeld, Leno and.. Singh?  Akaash bombed there so badly it was, well, almost funny.  Before that night, he hopped on stage once every few months and called himself a comedian.  After that night, he developed a singular focus on scrapping for as much stage time as possible while writing incessantly.