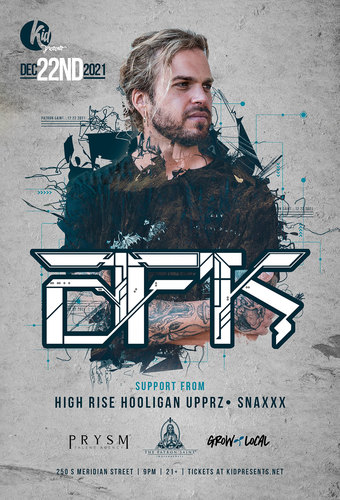 OK
From his 8-bit, retro-esque melodies to his destructive basslines and weighty wubs, Dallas native and bass producing monster AFK has been dropping heavy hitters and staples to the bass music community for years. His single “On The Floor” turned many heads, which lead to his first EP release “Full Clip” on Firepower Records in 2012. He continued to make waves with his anthemic remix of Jibb’s “Chain Hang Low” partnered with fellow Texas native and bass head Crizzly, followed by two more EP’s “Killionaire” and “Cloud Kingdom.” 2016 would prove to be another killer year for this self-proclaimed “Yoi Boi,” as his return to headlines brought us the dominating collaboration “Elemental ft. Anna Yvette” with dubstep pioneers Bare Noize, followed by his latest EP “Disconnected” and his induction to the SLVYVLL management family. Charged with a newfound, unshakable ambition, AFK is solidifying his position in 2018 delivering a stockpile of colossal tunes, including his heavily rinsed Boss released as the first track on Jauz new record label "Bite This". With the unyielding support of artists such as Excision, Zomboy, Jauz, and Getter, and supplemented by his extremely successful headline tour with Svdden Death , it is clear AFK will remain a formidable asset to the bass music community for years to come.