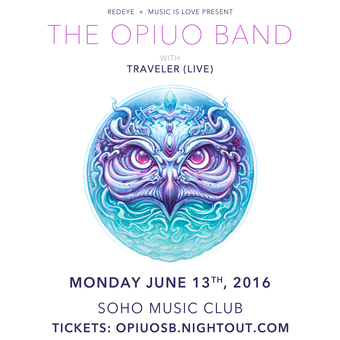 General Terms
Tickets are NON-REFUNDABLE. ALL SALES ARE FINAL.

THIS SHOW IS SOLD OUT -- THANK YOU

For New Zealand native Opiuo, making music has been an undeniable passion that encapsulates his every moment. His incredibly original, against the grain style is often referred to simply as “funkadelic bass music”, a term he supports wholeheartedly. The producer who now calls Australia home first gained international recognition in 2010 with his single “Robo Booty” from his debut album “Slurp and Giggle”, which was a finalist for Best Dance/Electro Release at the Australian Independent Music Awards that year. His music has since reached the #1 position on the iTunes, Hype Machine, Beatport & Addictech charts. Racking up 5 million plays on his Soundcloud page, Opiuo swept the 2013 UK Glitch-Hop Awards with 5 wins. His latest full-length album “Meraki” was a finalist for the Best Electronica Album at the New Zealand Music Awards 2014.

One of Santa Barbara's most talented up-and-coming artists, Traveler's high-powered music is all about bringing the vibe up and making the people get down.