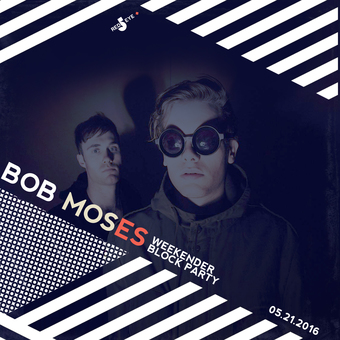 General Terms
Tickets are NON-REFUNDABLE. ALL SALES ARE FINAL.

Door Tickets WILL Be Available -- Entrance on Anacapa/Haley St
--------

We are pleased to welcome the debut of one of the most anticipated and talked-about acts of recent -- Canadian electronic/rock duo BOB MOSES.  Their music and following are equally unique--adored by both the dance and indie-rock community alike--can be found at packed stages across any sort of festival: Coachella and Bonnaroo to BPM and Lightning In A Bottle--or even in deep playa at sunrise during Burning Man.  Their critically acclaimed 2015 album "Days Gone By" alternates between brooding dancefloor burners and moments of reflective, downbeat repose--and was named as one of the top albums of 2015 by KCRW, Dancing Astronaut, Resident Advisor, and even Ellen Degeneres who personally invited the duo to perform on her show.

We proudly welcome one of our favorite DJ's on earth, legendary electronica producer, Burning Man hero, and all-around nice guy -- LEE BURRIDGE -- back to Santa Barbara for his first show in over (14) years!!! You've seen him command the decks at Burning Man atop the Robot Heart art car for his legendary annual marathon sunrise sets...he's also the same man easing you into the sunset at The Woogie during LiB...or maybe you know him as the boss / creator behind the equally praised All Day I Dream mega-events he throws in LA, NYC, SF, or London.  It is beyond a shadow of a doubt that Lee is one of the most sought-after DJs within the underground dance scene...

It takes an equal part talent, finesse, sass, and balls for a woman to get the right kind of attention in the ever competitive industry of young DJs and producers…Kittens has just that. With her vast knowledge of music and past as a dancer, Kittens (born Lauren Abedini) has been able to find a balance between low grinding electronic beats, heavy rap, and future beat music which has earned the support of some of the most influential artists of our time; including longtime mentor, Usher, Kid Cudi, whom she supported on his 2013 tour, Skrillex, Gaslampkiller, Salva, and A-trak who has her signed to his record label Fool’s Gold as well as championed her in every facet of her career.

One of Santa Barbara's most talented up-and-coming artists, Traveler's high-powered music is all about bringing the vibe up and making the people get down.

Brooklyn producer M!NT produces low-end beats that pull from many of his favorite genres like jazz, r&b, and electronica w a kinetic momentum to keep the dancefloor moving

A local favorite and connisseur of all things deep & dark, Steven "Slothy" Toth has won over the hearts of many with his memorably long sets & eccentric yet humble charm.

Lee Burridge is an internationally known house and breakbeat DJ. He is from the UK but lived and worked in Hong Kong and occasionally Thailand during the 1990s. Returning to Lon... View Artist