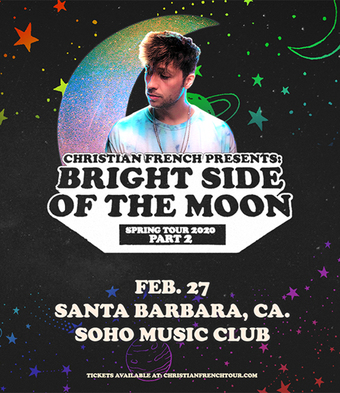 Christian French presents his "Bright Side of the Moon" Tour -- coming to SoHo Music Club in Santa Barbara,CA on Thursday 2.27 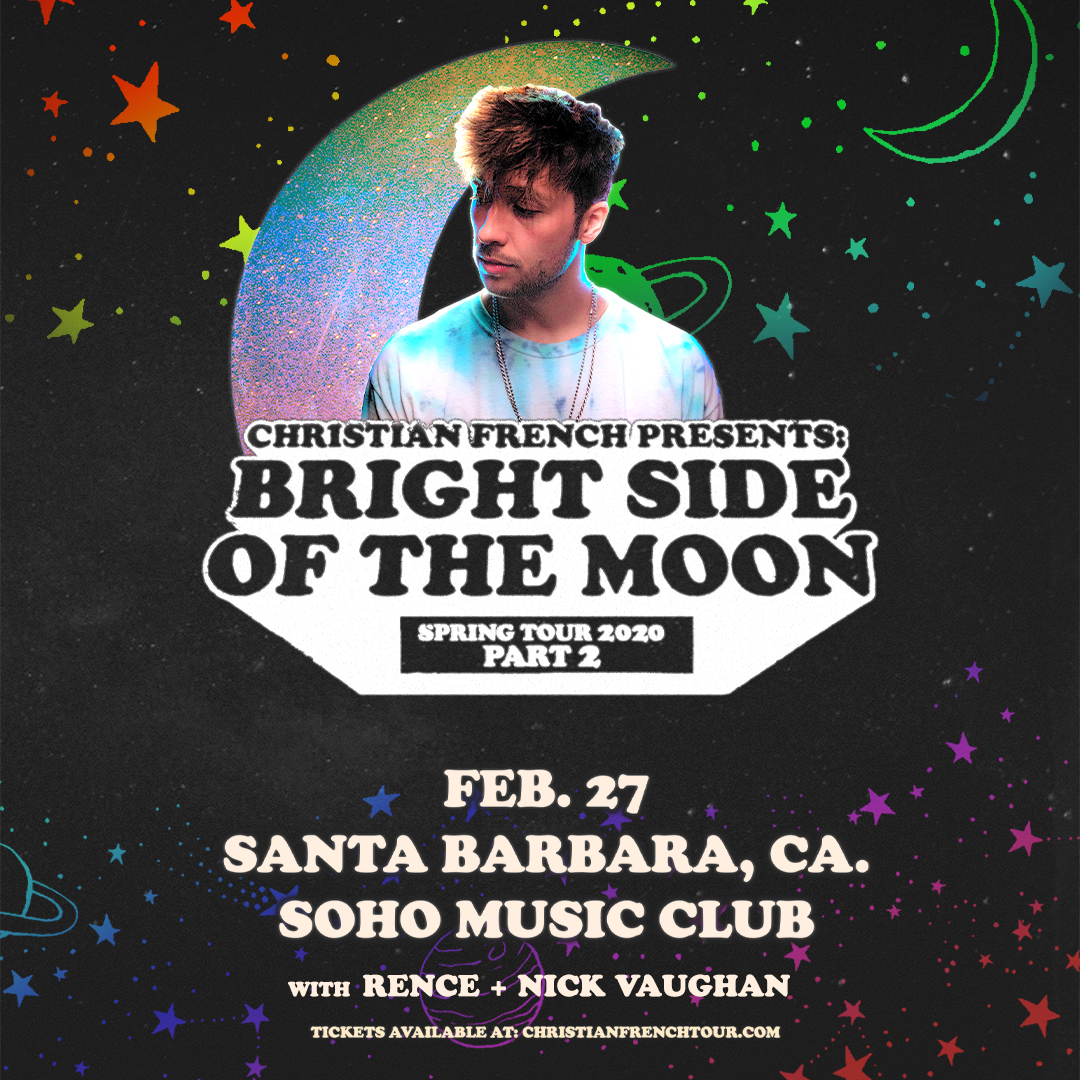 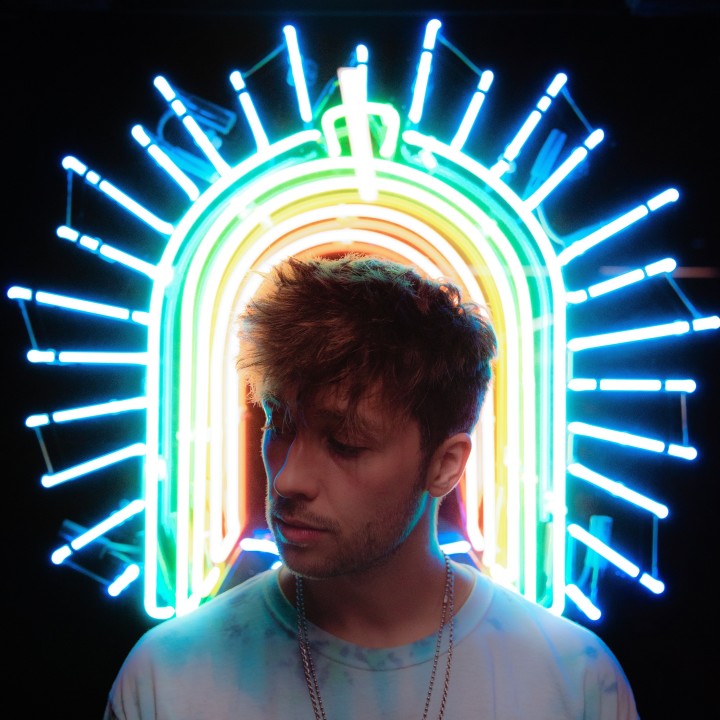 21-year-old singer/songwriter Christian French began his music career posting acoustic covers on SoundCloud in high school. Attending Indiana University, French met fellow Indiana producer Triegy, and together they self-released their first single "Fall For You" (5M streams), which charted on the United States Viral 50 chart on Spotify. Following this release, the duo released a string of four singles including "By Myself (17M streams) and "Dying Alive" (6M streams). With his growing success, French traveled to Los Angeles to work with Grammy-nominated producer Dru Decaro, together creating French's debut collection Natural Colors (15M total streams), which includes the singles "Love Ride", "Superstars", "Sweet Home", "Hearts Of Gold", and most recently "Someone New".In mid-2018, French was invited by Chelsea Cutler to be the special guest on her Sleeping With Roses Tour. The two sold out the 17-show North American tour in less than three weeks after announcement. In 2019, French is joining Quinn XCII on his 34-stop North American spring tour From Tour With Love. 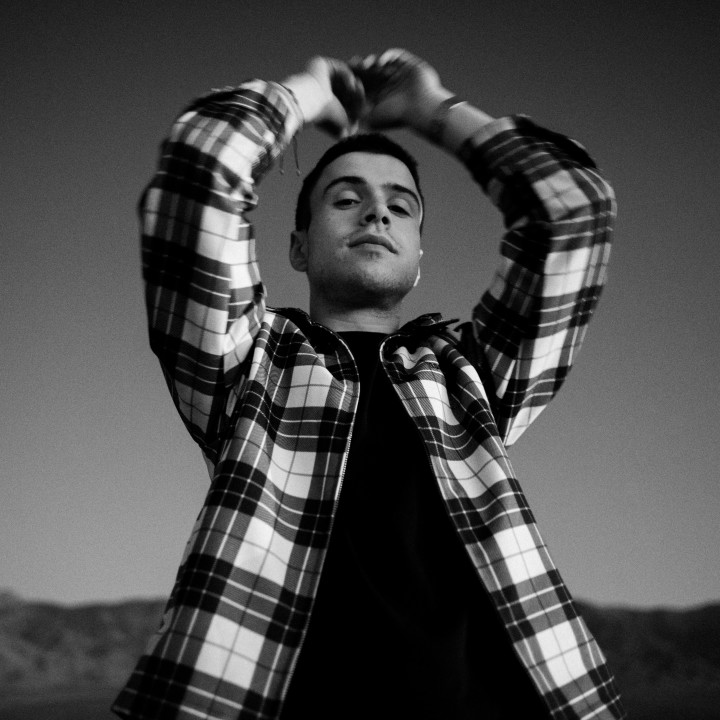 Rence is nothing if not diligent. The Los Angeles-based singer-songwriter has had a hustler’s mentality over the past few years, cultivating a thriving independent music career while juggling a handful of pursuits: studying at New York University, where he graduated this past spring in three years’ time; bussing tables when he wasn’t in class; working at a recording studio when he wasn’t at the restaurant; and balancing industry internships in between.

Needless to say, when it came time to write his own songs, he did it with the spare scraps of time he had on the job.

“The future is ahead of you. If you put your head down and work hard, you can get there,” says the 21-year-old. “That's something I feel like I've had to always believe in, and I think it’s an important message for other people to believe in as well, so they don't feel like their hard work is for nothing.”

For Rence, that mentality has manifested in his music, which has built him steady acclaim and a devoted audience. Since 2017, he has refined his abilities and explored his sound in real-time, namely with the collaborative EP Nineteen alongside Julian Lamadrid and last year’s laidback Pink. It was with the latter that he gained significant momentum. Its single “Baby Blue” -- a melodic, floating meditation on finding the spectacular in the mundane of everyday life -- has tallied more than 5 million streams, becoming a baseline to the unique perspective he has to offer.

After signing to Epic Records at the end of spring, Rence made his proper debut on “Expensive” -- his first major single featuring Noah Cyrus. Heating up the summer, the track immediately popped off as a phenomenon. Within a few months’ time, it clocked 3 million global streams and also scored acclaim from Billboard. It steamrolled a path for a whole lot more though.

With a slew of tracks on deck, Rence is blazing his trail through consistently evolving creatively as a musician. July 2019 saw him make his live debut by selling out Baby’s All Right in Brooklyn. However, everything merely paved the way for his next EP, Fall 2019.

He initially teased the project with “Darkside,” hinting at the six-song set’s delightful darkness. The single “I know” expanded that vibe with its delicate fusion of alternative R&B, glitched-out pop, and soulful synthetic effects. On the EP, “super sad” drips from lyrical liquidity into a potent bounce with swagger and attitude. Meanwhile, harmonies exhale through guitar and finger-snaps on the confessional warning of “You don’t wanna know me.” The project concludes with the nighttime-ready “Darker,” highlighting his songcraft and vocal expanse all at once. As a whole, the music showcases the scope of his stylistic alchemy, defying borders and delivering a dynamic take on pop.

All around, Rence pushed himself to dig deeper than ever before on Fall 2019.

"The mood is darker -- not necessarily because I’ve become darker, but because I have a dark side, and it’s been hanging around a lot lately,” he admits. “Basically, these songs are me going a little crazy. They were created while lost in myself and the world…feeling the weight of the world while still trying to keep a positive outlook that so many want from me.”

It’s ultimately reflective of Rence’s truly diligent commitment to making a difference with his art.

“My mission is to just be a positive force,” he says. “I create songs for myself and for the world that I hope will help people in whatever ways they need help. I'm here. I never want to be the person who's disconnected from the people that are listening to the music.”