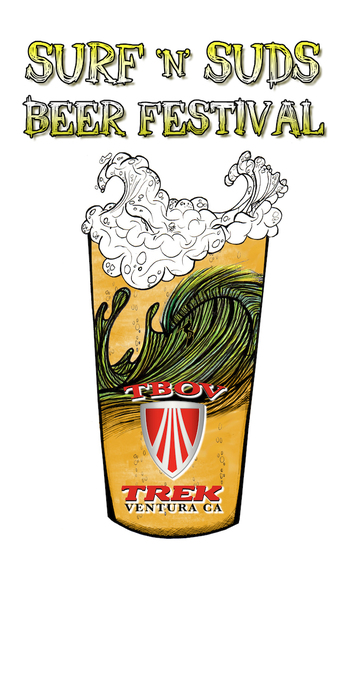 General Terms
Must be 21+ with valid photo ID for entry. Tickets are NON-REFUNDABLE. All sales are FINAL.

Over 45 breweries will join us at the San Buenaventura State Beach. Live entertainment by Crosscut 805 Band, After the Smoke, and DJ Hecktik! Food trucks, mega size beer pong, and lawn games will all be part of the fun once again!

Get to Surf ‘n’ Suds safely! Transporation options include Jump on the Brew Bus (Pick ups from Figueroa Mountain in Santa Barbara, Island Brewing Co. in Carpinteria and M Special in Goleta); Amtrak (15% off ride to Ventura by using promo code “V580”—free shuttle will take you from the Amtrak station to event and back to station after event); free bicycle valet by VCCOOL; or hop on the Downtown Harbor Trolley).

Coming from Goleta, Santa Barbara or Carpinteria? Jump on the Brew Bus will take you to the event and get you home for just $20! Pickup is at Figueroa Mountain Brewery (137 Anacapa St., Santa Barbara) and Island Brewing Company (5046 6th Street, Carpinteria)! OUR NEW GOLETA pickup is $25 from M Special (6860 Cortona Dr., Building C,  Goleta, CA 93117). You can also take Amtrak from the north or south, and Jump on the Brew Bus will pick you up at the Ventura station and drive you down the road for FREE!!! For those riding bikes, park in our FREE bicycle valet provided by  VCCOOL!